Synopsis: When the wealthy Captain Joseph Trevelyan is murdered, his nephew, James Pearson is the obvious suspect. However, Emily Trefusis believes her fiancé is both too weak and too stupid to have committed the crime and, with the help of an ambitious journalist, Charles Enderby, searches for the real killer.

The book is also known as The Sittaford Mystery. 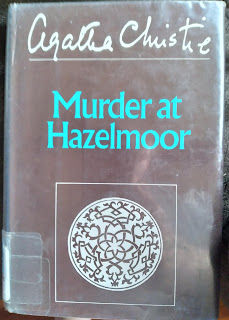 Review: It had been a while since I last read an Agatha Christie book and, since I knew I would have some extra reading time the next couple of weeks, decided to check this one out from the library. I wasn't really sure what to expect from it, but it ended up being one of my favorites.

I was a huge fan of this murder mystery. The victim was a guy who seemingly had no enemies and, while his estranged family, which was to inherit his money, had a motive, most of them didn't have an opportunity to commit it, especially since he lived in a community that was small enough to notice any strangers. The only exception was James Pearson, who also was likely innocent despite the evidence.

The part about the séance was also intriguing. The second the captain's murder was revealed during that party game, I suspected one of the people sitting at the table was involved. However, even though I had my suspicions about which one (and those did turn out to be correct), the distance between the properties and the heavy snowfall did make it seem impossible for any of them to have committed the crime.

Adding to all of it was the mystery surrounding Mrs. Willett and her daughter, Violet, who chose to lease the captain's estate for a few months for reasons that made no sense. It was obvious they were up to something but, at the same time, it was hard to tell if that something was related to the murder.

I thoroughly enjoyed Christie's amateur detective, Emily, especially the way she was quick to use her feminine charms to manipulate Charles into helping her do a lot of the dirty work. This was a surprise for me, considering I don't normally like Christie's female detectives. Miss Marple, for example, is too much of a know-it-all (though I do like her character more in movie form) and Ariadne Oliver was just annoying. It's just too bad this is the only book we see Emily in.

On the flip side, Inspector Narracott also proved to be a solid investigator, setting up a nice duel of sorts between the two as he had many of the same ideas she did and often was the first to investigate them. I always prefer "official" detectives who are competent, versus some of the ones I've seen in other novels that take shortcuts and don't actually investigate.

Another thing I found surprisingly intriguing was the potential romantic subplot between Emily and Charles. While she claimed to love James and was going out of her way to clear his name, there was definitely some chemistry between her and the journalist and, in many ways, he seemed to be better suited for her. I was legitimately interested in seeing how that played out (and enjoyed the outcome a lot more than expected).

Final Opinion: This is, at least in my opinion, one of Agatha Christie's best murder mysteries, both because of the mystery itself and the memorable characters. I just wish this book would have been the first of many featuring Emily Trefusis.