Synopsis: Siblings Jerry and Joanna Burton take residence in the small town of Lymstock while Jerry recovers from an accident. When they receive an anonymous letter accusing them of secretly being lovers, they laugh it off. However, they soon learn they aren't the only ones receiving accusation letters and, before too long, things take a dark turn when one of the recipients kills herself as a result of it. When the investigation seems to hit a dead end, the vicar's wife calls up her friend, Jane Marple, to help. 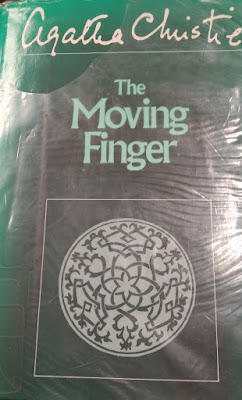 Review: After reading another Miss Marple mystery a few days ago and enjoying it more than expected, I decided to check out this book from the library. Overall, I found I enjoyed it.

I thought the mystery in this book was an intriguing one. At first, the letters the Burtons and others were receiving seemed relatively harmless becasue they were filled with unfounded accusations. However, after the suicide and, eventually, another murder, it became apparent there was something a lot more menacing about them.

Adding to the mystery was the fact nobody wanted to share the content of the letters they were receiving or even admit they received them. This, in itself, made the mystery a little harder to solve because a person claiming not to have received a letter could easily be lying as well as someone who claimed they received several letters. And, of course, identifying the typewriter didn't help matters because it was shared by the entire community.

I am going to be honest, while I enjoyed the overall mystery, I wasn't a huge fan of Miss Marple in this one. She almost seems like she's a little too good as a detective, basically being called in at the last minute and solving the case almost instantly.

It's probably just a matter of personal preference, but I prefer detectives that can be challenged and will occasionally make a mistake. Miss Marple reminds me of someone who secretly reads the last chapter of a mystery novel so they can pretend to notice the clues later. In fact, I think that is a big part of the reason why Christie chose not to introduce her into the story right away.

Final Opinion: The mystery itself was entertaining. I just wasn't a fan of it being solved as easily as it was by Miss Marple and think it might have been better had she not been a part of it.