August 25, 2019
Synopsis: While reluctantly attending a literary luncheon, mystery writer Ariadne Oliver is approached by Mrs. Burton-Cox, the future mother-in-law of Ariadne's godchild, Celia Ravenscroft. When Mrs. Burton-Cox inquires about the apparent double suicide of Celia's parents 10 years earlier, asking who killed who, Ariadne is, at first, offended. However, with the question lingering in her head and with Celia's blessing, Ariadne seeks out help from Hercule Poirot in an effort to find out the truth. 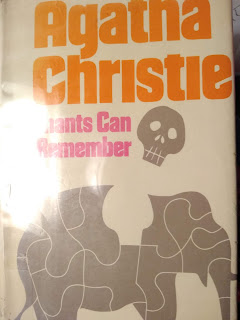 Review: Some time ago, I made it my personal goal to read all of Agatha Christie's Hercule Poirot novels. I'm very close to succeeding in that goal, having finished the second-to-last book. Unfortunately, this one turned out to be kind of a disappointment for me.

Poirot is easily one of my favorite fictional detectives. However, his later mysteries (published when Christie was in her late 70s or early 80s) just aren't as magical as the books that got me hooked in the first place. And, this book easily was my least favorite.

There were a couple things, in particular, I found I wasn't a big fan of when it came to this book. The first one was Ariadne Oliver. She's very prominent in the later books, getting Poirot involved in the first place. But, I kind of understand what Christie was trying to do with this character, I just feel she never quite figured out how to use her.

In some cases, like Hallowe'en Party, she completely disappears and just doesn't play a big enough role in the plot. In this book, in contrast, there was just too much of her.

I probably would have had a different opinion of her had she actually did something important. But, the story just seemed to drag on largely as a result of her "investigation," with various characters giving different versions of the same story, offering "clues" that might or might not be inaccurate rumors and, in some cases, Christie herself seemed to be changing the story a bit, as though she forgot what she had written earlier. In other words, it was definitely not up the standards I would expect from arguably the greatest murder mystery writer ever.

Another thing that bothered me about this book was there, ultimately, was no bad guy to catch. The book made it pretty clear, from the start, the double suicide was exactly what it seemed to be and the only thing Poirot was trying to figure out was the motive. As a result, there just wasn't the same urgency/suspense the mystery would have had if there was a murderer still at large ready to strike again. I kept hoping for a surprise twist (other than the one I figured out halfway through the book) and it didn't come, leaving me very disappointed.

Final Opinion: I'm glad there is one more Hercule Poirot book I haven't read yet. Otherwise, this would be a very disappointing way for me to say goodbye to one of my favorite fictional detectives.