Three Night Court Storylines the Reboot Should Bring Closure To

Even though the jury is still out regarding the Melissa Rauch -led Night Court reboot I do think the fledgling series has shown potential by modernizing the stories while still honoring the original that went off the air in 1992. So far, the show has focused solely on Abby Stone's (Rauch) relationship with her deceased father, Harry ( Harry Anderson ) and a now-elderly Dan Fielding ( John Larroquette ) and it still needs to give the supporting cast a little more depth. However, there is an opportunity for the reboot to bring closure to a few storylines from the original series: What happened to Bob and June Wheeler? Bob and June ( Brent Spiner and Annie O'Donnell ) were frequent and popular guest characters on the series and their hard-luck stories were some of the funniest moments on the show. Their last appearance was in Season 4, when they purchased the courthouse concession stand for $250,000 only to watch it fail because they had to raise the prices to obscene amounts. Th
Post a Comment
Read more

Synopsis: A group of vicious aliens know as Crites escape a prison and crash land on a Kansas farm. They are stalked by two alien bounty hunters who cause just as much damage. Who's in it? The movie stars Dee Wallace , M Emmet Walsh , Billy Green Bush , Scott Grimes and Nadine Van der Velde . Review: We started having a family movie night on Tuesdays, mostly as a way to convince our daughter she doesn't need to go to martial arts classes five nights per week. She's 13 and gaining an interest in horror movies so I picked this one out. Describing this as a horror film might be a little inaccurate. I would say it is much more of a science fiction comedy than anything else. However, it had been a while since I had seen this movie myself and it was as good as I remembered. I think the thing I liked most about this was how the Crites were able to keep a relatively low profile, stalking a single family and keeping them isolated from the rest of the town. In fact, I'm not so
Post a Comment
Read more 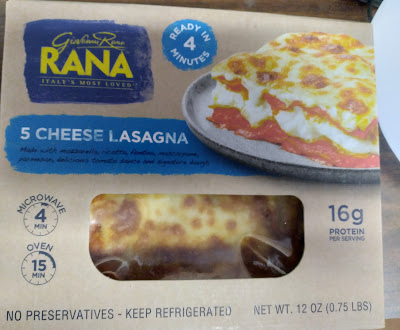 I had planned on just having a noodle cup for lunch today but had to stop by Kwik Trip on my way to the office and saw they had this product by their take-home meals. Since it was on sale today (for $4.99), I decided to give it a try. It didn't disappoint. There were a couple things I really liked about this product. First, it only took 4 minutes to make in the microwave. This is considerably faster than many other single-serve lasagnas I've picked up in the past. In fact, it was quick enough where I think even my wife (who only gets 30 minutes to eat lunch) would find it convenient. I was a little concerned it wouldn't be very filling because it didn't look very large or thick when I took it out of the box. However, there was quite a bit of cheese on it and that did make it a lot more satisfying than expected. I didn't even find myself needing an afternoon snack as a result of this (something that probably would have been the case had I gone with a noodle cup). I
Post a Comment
Read more

Synopsis: Sam, a 13-year-old boy living in an impoverished and crime-ridden city, believes his next-door neighbor, Joe Smith, is really Samaritan, a superhero who is believed to have been killed 25 years ago. When a career criminal wears the mask and carries the powerful weapon used by Samaritan's brother, Nemesis, Sam tries to talk Joe into coming out of his retirement. Who's in it? The movie stars Sylvester Stallone , Javon "Wanna" Walton ,  Pilou Asbæk ,  Dascha Polanco and  Sophia Tatum . Review: My wife and I came across this movie yesterday evening and since the trailer made it look somewhat interesting, decided to watch it. I had some doubts about an aging Sylvester Stallone playing a superhero. However, it turned out to better than expected. The movie was far from perfect. Some of the CGI looked a bit fake and that de-aging thing they did on Stallone in flashbacks made him look more creepy than young. The final battle inside a burning building was also a b
Post a Comment
Read more

I still find myself a bit undecided about the fledgling Night Court reboot, which still is trying to fill the big shoes of the original. However, the show took a big step in that direction by showing us the human side of Abby Stone ( Melissa Rauch ) by revealing she is a recovering alcoholic. Comedy series don't always need to be funny. In fact, the 80s/90s version of this series had more than its share of heartbreaking moments. Sometimes a little seriousness goes a long way toward making the characters a lot more believable and relatable. Stone's revelation about her problem and how it was a big part of the reason she wants to honor her dad by helping people was a perfect example. I think the thing that impressed me most was how the reveal was done a lot more subtly than a lot of other series might have done it. She didn't make a big announcement or fall off the wagon. Instead, Dan Fielding's ( John Larroquette ) own history with a recovering spouse allowed him to see
Post a Comment
Read more

Synopsis: Therapist Rose Carter meets an intake patient in the hospital psychiatric wing who witnessed a suicide and now believes something is stalking her. The patient kills herself in front of Rose and she immediately starts experiencing similar occurrences that slowly drive her close to insanity. Who's in it? The movie stars Sosie Bacon , Jessie T. Usher , Kyle Gallner , Robin Weigert and Caitlin Stasey. Review: My daughter wanted to see this movie, so my wife and I agreed to watch it with her this evening. I wasn't really sure what to expect from it, but it ended up being a good choice. I think the thing I liked the most about this film was the mystery surrounding what was happening to Rose (Bacon). The occurrences looked supernatural at first, but her family also had a history of mental illness, and she experienced something traumatic, so it could have also been her having a mental break. Some scenes, including the one involving her cat, supported the latter while some
Post a Comment
Read more

Synopsis: Twin brothers Elias and Lukas arrive at their mother's house and discover her face is bandaged from a "procedure." The twins suspect something is wrong when she doesn't act like herself and begin to suspect she is an imposter. Who's in it? The movie stars Naomi Watts , Peter Hermann , Crystal Lucas-Perry and Cameron and Nicholas Crovetti . Review: We took my daughter back to college this weekend and by the time we got home, I just wanted to relax on the couch and watch a movie. I came across this one on Amazon Prime and thought it looked interesting, so we ended up giving it a try. The film has an interesting mystery. From the moment the twins arrive at their mother's (Watts) farm, it's obvious there is something off about her. In addition to having her face bandaged, she doesn't want to sing them their favorite bedtime song, throws away a photo they drew and has a few somewhat suspicious house rules, including not going into the barn. O
Post a Comment
Read more
More posts