December 26, 2017
Synopsis: When Gerald Wade is found dead inside his room at Chimneys, it is initially ruled an accidental overdose. However, when one of his friends, Ronny Devereux, is fatally shot, Lady Eileen "Bundle" Brent enlists the help of Wade's friend Jimmy Thesinger and half-sister Lorraine Wade to investigate a secret society known as The Seven Dials and, ultimately, the trio look to stop the group from stealing a secret formula. 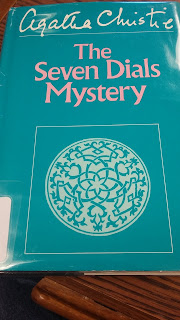 Review: When I started reading this book a couple weeks ago, I thought it would be one I would finish in a matter of a few days. However, the book ended up taking me much longer to get through mostly because I found I was having a hard time staying interested in it.

The story starts out promising, with the mysterious murder of Gerald Wade. But, I feel this book ultimately ended up being a case of Agatha Christie trying to do too much.

Let me put it this way, Wade's murder was interesting. He seemed like a nice (albeit somewhat lazy) guy with no enemies. And, the only people in the house with him (other than servants) would be, on the surface at least, considered his friends. Christie could have made the entire novel about him with his relationships with the various other house guests coming under scrutiny. Instead, she makes that a minor part of the overall story and focuses on secret societies and a secret formula.

On top of it, Christie doesn't even give the reader a fair chance to figure out who the bad guys are. There are limited clues throughout the book and she seems to purposely withhold information to avoid giving too much away (and, even then, I was able to successfully make an educated guess about halfway through the book).

To be fair, the twist involving what the Seven Dials really is (and who their seventh member is) was somewhat interesting and a little unexpected. However, it just wasn't enough to make this book as interesting as I was expecting it to be and I just didn't enjoy it as much as I normally enjoy Christie's novels as a result.

Final Opinion: As I said before, the book had a promising start, especially since there were a number of people at Chimneys who could have been Wade's killer (while pretending to be his friend). But, because Christie decided to lessen his murder by making it part of a larger, not quite as interesting story, the book never reaches its potential.