Book Review: Agatha Raisin and the Walkers of Dembly by M. C. Beaton (1995)

Synopsis: When activist Jessica Tartinck took over leadership of the Dembley Walkers, she turned the once casual rambling group into an outlet to attack local landowners over rights of passage through their private property. Her latest target is Sir Charles Fraith despite Sir Charles' willingness to work out a compromise. When Jessica is found murdered on Sir Charles' property, he becomes the primary suspect. However, Deborah Camden, a Dembley Walker who has secretly been dating Sir Charles believes he is innocent and asks Agatha Raisin to investigate. 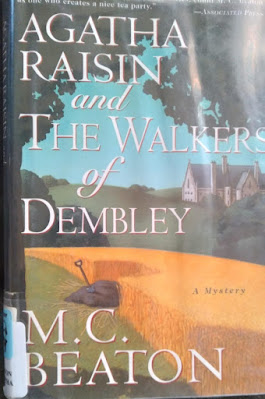 Review: I started reading M. C. Beaton's Agatha Raisin books right around the same time I actively started reading Agatha Christie's Miss Marple mysteries. Of the two detectives, I found I've enjoyed Agatha Raisin more. Unfortunately, this fourth book in the series was one of the exceptions to that.

OK, to be fair, I didn't hate the book. The overall story involving Agatha and her neighbor/would-be boyfriend, James, pretending to be a married couple to infiltrate the Dembley Walkers was actually kind of funny. I liked how their amateur ways/lack of planning nearly gave them away from the start and how Agatha inadvertently saved their cover story. It was a nice reminder of how Agatha does this more of a hobby rather than having any real training/experience.

I also thought the twist involving Agatha's unusual relationship with James was an interesting one and loved how the book set up a suspenseful storyline involving her estranged husband. To be honest, this is something that normally wouldn't interest me but I do find myself wondering how that will play out over the next couple of books.

My biggest complaint about this book is, even though the storyline involving her and James was interesting, the mystery itself was a bit thin. Basically, it was Agatha and James conducting a few interviews and mostly learning details about Jessica's final few days the reader already knew. When she catches the killer, it was purely a combination of a guess and random luck. There was nothing that made me think she really deserved to solve the crime. Heck, previous books, there wasn't even an attempt to create even a bit of suspense by putting her life in danger. That would have at least made the mystery somewhat interestng.

Another thing I found I didn't like about the mystery is the motive for murder was a bit dated, even back in the 1990s, when this book was written. To be fair, British standards might be different than American standards, but I really wish Beaton would have come up with something better.

Final Opinion: The murder mystery isn't as good as other Agatha Raisin stories but the overall story was still entertaining enough to make it worth reading this book at least once.