Book Review: The Murder at the Vicarage by Agatha Christie (1930)

January 15, 2018
Synopsis: The much-despised Colonel Lucius Protheroe is found murdered in the vicar's study. There is a wide range of potential suspects, including his cheating wife and her lover and the vicar himself, and it appears the murderer may never be caught. However, the vicar's next door neighbor is Miss Jane Marple and no detail ever escapes her. 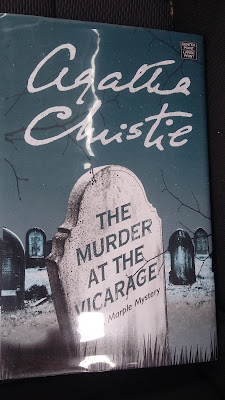 Review: Even though I had heard of Agatha Christie's Miss Marple character, I honestly didn't know a whole lot about her prior to reading this book, which is also the first novel she appears in. As  result of that, I really wasn't sure what to think about her, especially since, at first at least, she didn't seem to have much of a role in this story. As it turns out, however, I found I liked her and this mystery.

The thing I found I liked about Miss Marple is she brings a lot of the same observational skills Christie's other famous detective, Hercule Poirot, offers. But, unlike the very arrogant Poirot, she is much more subtle about things. In fact, there were times in this book when she was purposely being quiet about something and it felt as though she was withholding the information because she was hoping she was wrong. This made her very likable.

I also found I liked the overall mystery when reading this book. The most obvious suspects were Protheroe's cheating wife and the artist she was having an affair with. But, once they were ruled out, then it became a bit more of a free-for-all as far as potential murder suspects go since it seemed pretty much everyone in town hated the victim and a number of them had alibis that were sketchy at best.

In fact, even the vicar (who serves as narrator in the story) wasn't above suspicion and, for a short while, I wondered if maybe Christie would make him the killer. Ultimately, I was able to make an educated guess. But, even though I was correct, I wasn't able to say how that person did it until Miss Marple made her final reveal, largely because the timeline didn't ever seem to add up. This kept me reading the book until the very last page as a result.

Final Opinion: Miss Marple is an intriguing character and I can't wait to read more of her mysteries in the future. That, combined with a halfway decent mystery, makes this book worth taking the time to read.