February 25, 2020
Synopsis: Paul English enjoys telling people the truth, or at least his version of it, even if it means hurting their feelings. So, it isn't much of a surprise when he winds up murdered and buried in a bog. Unfortunately for Sergeant Hamish Macbeth, he has a long list of suspects to choose from while, at the same time, trying to protect himself and his constables from the unhinged and murderous Detective Chief Inspector Blair. 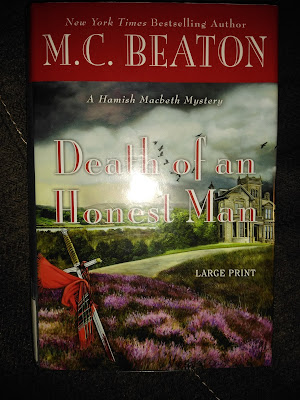 Review: Roughly two years ago, I wanted to take a break from Agatha Christie and, since it was in the same aisle at the local library, picked up a copy of Death of a Gossip. To tell you the truth, I wasn't a huge fan of that book. But, I liked the character Hamish Macbeth enough to give the next book, Death of a Cad, a try and became hooked. As a result, Macbeth became a regular part of my reading list.

When I started reading Death of an Honest Man a couple days ago, it was with mixed emotions. I was excited to read the next chapter in Macbeth's life but, with the author's death this past December, I also realized I was reading what would likely be the final book in the series. Fortunately, if it does wind up being the last Hamish Macbeth novel, I can at least say it was a good one.

First of all, the mystery wound up being a little more complex than I was expecting. There were some strong suspects but, if they didn't have an alibi for one of the murders, they did for the other and, based on the assumption the murders were related, it did make it a little difficult to point a finger at anyone. In fact, when Hamish ultimately does figure it out, he has to cross some lines in order to prove it.

The part about Blair was also intriguing because, as he slipped into madness, he became so unpredictable. Not only was it unclear what steps he might take to get his revenge on Hamish and others he felt wronged him, it made me wonder whether or not he would finally get what was coming to him or if he would find another way to weasel out of punishment. In fact, one thing I found I really appreciated about this book was the way Beaton finally brought some closure to his story.

I think the most memorable thing about this book had to be the side story involving Hamish rescuing an "evil" wildcat because he believed it was his beloved pet, Sonsie. As I told my daughter, one of hte reasons why I had a hard time putting this book down was I knew that evil feline was going to have some sort of legitimate impact on the book and I couldn't wait to find out what that was.

Probably the only thing I was disappointed about, especially with it apparently being the last book, is Hamish never visited one of my favorite characters, the "seer" Angus Macdonald. I was actually kind of surprised by this considering he was so stumped and Angus likely would have given him some clue to go on. At minimum, their exchanges are usually pretty funny so I would have loved to read about it one last time.

Final Opinion: As I said, I'm sad this will likely be the last Hamish Macbeth novel I ever read. But, I did enjoy it and, if it is the end, I'm glad the series will end on a high note.