Synopsis: Agatha Raisin returns from vacation to discover Carsely has a new resident, Mary Fortune. Mary seems to be loved by all the residents (especially Agatha's neighbor, James Lacey) due, in part, to her gardening expertise. However, when area gardens are vandalized prior to a prestigious horticulture contest, the village turns against the "outsider" Mary and she is eventually found murdered with her head buried in a pot of soil. Despite the local authorities encouraging her not to, Agatha conducts her own investigation and discovers Mary wasn't the charming person she appeared to be. 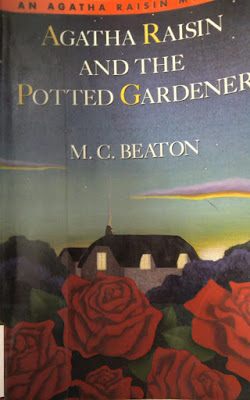 Review:  I had to go to the large print section of our local library to find this third book in the Agatha Raisin series. However, after reading it over the weekend, I was glad I didn't wait for the regular print copy of it to return.

At first, I wasn't really sure what to think about the mystery. Part of this was it took quite some time for Mary to finally be murdered and, for a while I was wondering if it was going to ever happen. Once it did, however, it turned out to be a decent mystery.

There were a couple factors that made this mystery a little harder to solve than expected. One of the main ones was everyone in Carsley seemed to have a reason to want Mary dead. Part of this was because most of the villagers believed she was the one who sabotaged the gardens (despite zero evidence pointing to her) but, as Agatha investigates, she learns there are plenty of other motives as well, created largely because she wasn't as nice of a person as she pretended to be.

Adding to it was the introduction of Mary's estranged daughter and her boyfriend, a pair that also had a financial reason to commit murder but had an air-tight alibi. That's the type of thing that could go a couple different ways - either their alibi isn't real or they are just a red herring. The book does a decent job of keeping the answer to that a secret until toward the end.

The part about Agatha once again trying to cheat in a contest (despite her last attempt ending in a deadly result) ended up being more entertaining than I was expecting. I was especially intrigued with the way her "friend" Roy got her to sign a contract to work for his employer for 6 months in exchange for helping her (only to have it all backfire on her regardless). The outcome of that dilemma was actually kind of surprising.

I did have two somewhat minor complaints about this book. The first was the bad guy ended up being a bit too easy to catch and there was zero suspense when her and James figured it out. Compared to the first two books, which both had Agatha's life in danger, it was a bit of a letdown.

I also was disappointed about the book not explaining when and why Mary wrote Agatha and James into her will. It was almost as though she expected to die but we aren't given any answer about whether or not that was actually the case or if she just did it on a whim. It ended up being a minor thing overall but it still left me wondering.

Final Opinion: I think the first two books in the series were slighly better, especially when it came to stopping the murderer. However, it still wound up being a fun read and I'd recommend the book as a result.