Book Review: The Case of the Duplicate Daughter by Erle Stanley Gardner (1960)

Synopsis: When Carter Gilman disappears from the breakfast table, his daughter, Muriell, investigates and discovers a broken chair, spilled paint and $10,000 on the floor of the garage. Per her father's previous instructions, she avoids calling the police and, instead, reaches out to Perry Mason. Mason learns Carter is unharmed but also comes to believe his second wife, Nancy, is being blackmailed by a detective over the legitimacy of her daughter, Glamis. When the detective is found murdered, Carter becomes the primary suspect and Mason is tasked with defending him. However, Mason's hands become tied when Carter refuses to tell him the full truth because he believes one of his family members is the real killer. 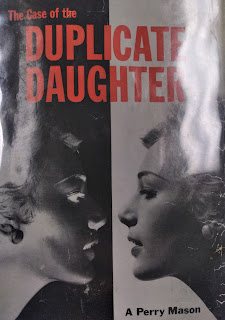 Review: This was one of the books I picked up at our local library last weekend and, thanks to having time to read while barbecuing, I was able to finish it last night.

To be honest, I didn't think I'd enjoy the book when I first started reading it. This is because it seemed to take an awful lot of chapters for the book to get to the main plot, the murder case, and I was beginning to believe the book would mostly consist of Mason spinning his wheels as he tried to find out the real reason Carter Gilman wanted his services. Then, when the murder did finally happen, I was concerned the case would end up being rushed and not overly interesting. However, as it turns out, it ended up being an intriguing and entertaining case.

I think the thing I liked most about this mystery was the fact Mason's client truly looked guilty of something, whether it was committing the actual murder or aiding the person who did. The fact Carter pretty much said he was protecting the guilty party only added to this and, when witnesses reported Glamis was also in the garage, it seemed like something that was going to put a nail in the coffin.

This, in turn, made the court case much more interesting because Mason had to do a lot of shrewd maneuvering to prevent Paul Drake from being a witness against his client and from being called to the witness stand himself because of his decision to place the $10,000 in his safe and not report it to the police - only to have Lt. Tragg, doing his finest work so far, get ahead of him.

I am also going to admit, I didn't see the ending coming. This surprised me a bit because the title of the book sort of gives it away. However, the writer does a great job of throwing in a red herring that made me think the title referred to something completely different. Ultimately, the surprise twist really was a surprise though, to be fair, it was also a surprise to the book's characters too, as well as a piece of very good luck for Mason.

Final Opinion: It does take a while for the book to get going but, once the body is found, it is a solid murder mystery and one I would recommend.