Book Review: The Case of the Singing Skirt by Erle Stanley Gardner (1959)

Synopsis: When Ellen Robb is wrongfully terminated from her job as a lounge singer and cigarette seller and accused of stealing money, she asks Perry Mason for help. When she comes to him later with a black eye and gun planted in her bag, Mason tries to pull a fast one on her employer, George Anclitas, by switching the weapon with one he had in his safe. When his client is predictably accused of murder a short while later, Mason is surprised to learn the fatal bullet was traced back to the gun he gave her. 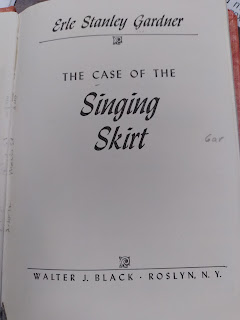 Review: I checked this book out from our local library about a week ago and, as I suspected, it was a fairly quick read, especially since I had some free time while sitting outside grilling. I've been a bit disappointed by the last couple Perry Mason books I've read. That was not the case this time.

One of the things I liked most about this book was the way it was hard to tell if his client was really innocent. As much as she liked to portray herself as a victim, it was also clear she wasn't being fully honest with Mason, especially when it came to her relationship with Helman Ellis. She described it as just business, but I suspected his wife (the victim) wasn't completely wrong about it being something more.

The forensic evidence involving the fatal bullet was also an intriguing twist. Even though Mason was able to find out his gun was one of two that were fired at the victim and may not have been the murder weapon, the fact it was used still made both his client and him look bad, especially since there was evidence of him giving her instructions on how to get away with a murder. For a while, it looked like his only way of staying out of prison himself was to throw her under the bus, something that would be outside his nature.

I am also going to compliment the prosecution in this book because, unlike many other Perry Mason mysteries, they didn't seem to take any sort of short cut, like tampering with a witness or withholding evidence. The fact they didn't do that, and the evidence still pointed to Mason's client made the case a lot more interesting because it really did seem like there was a good chance of her being guilty. As I've said before, these cases are a lot better if there is at least a slim possibility Mason is representing the murderer.

Final Opinion: It was a quick read and an entertaining book. It is, at minimum, the best Perry Mason mystery I've read this month and one of my favorites overall.