Book Review: The Case of the Lucky Legs by Erle Stanley Gardner (1934)

July 15, 2019
Synopsis: Lawyer Perry Mason is hired by a wealthy business man to represent Marjorie Clune, a small-town beauty who, along with the rest of her town, was duped by promoter Frank Patton and his "Lucky Legs" beauty contest. However, when Mason tracks down Patton, he discovers the promoter has been murdered and Marjorie may have been in the room with him at the time. In an effort to protect his client, Mason takes some risks that could ultimately cause him to be charged as an accessory if she's found guilty. 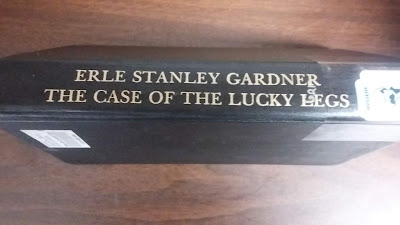 Review: After reading and being impressed with The Case of the Velvet Claws, I decided to pick out another Perry Mason book and wound up bringing this one home from the library. At first, I wasn't sure if I would end up liking it. But, as the book progressed, I found I enjoyed reading it.

The murder mystery itself did lack a little something. I had my suspicions, from the start, who killed Frank Patton and, as the book progressed and more clues were revealed, it only managed to confirm those suspicions. Yes, there were attempts to make other characters look guilty but, by the time I was halfway through the story, I pretty much was (correctly) convinced who the bad guy was.

That being said, the book still managed to be an exciting read, mostly because of the way Mason kept digging himself into a deeper hole. This included him lying about what he was doing at the crime scene, helping his client and other potential witnesses avoid being arrested and questioned by the police and ultimately putting himself in a position where he could potentially be blackmailed into throwing a case. Even though I knew he would eventually find a way to avoid being sent to prison (otherwise, there wouldn't have been any other books), I did wonder how.

The book also had quite a few additional characters that did end up adding to the overall story, mostly because it was difficult at times to figure out whether or not they were accomplices or were just innocent bystanders who got caught up in all of it. This included Marjorie herself, who I knew was probably innocent, mostly because Mason was defending her, but also kept acting very suspicious throughout.

The secondary story, which had Mason essentially competing against Detective Paul Drake, was a little bit of a flop for me, mostly because it really didn't seem to go anywhere. Yes, there were parts of that story that did have some impact on the ending. But, it also was part of the plot that could have been left out and not had any real impact overall and I think I would have much rather seen them on the same side throughout rather than the whole "frenemy" theme.

Final Opinion: So far, I'm 2-for-2 when it comes to Erle Stanley Gardner Perry Mason books and intend to check out a third one the next time I'm at the library. This one is one I would definitely recommend as a result.