Book Review: The Case of the Lucky Loser by Erle Stanley Gardner (1956)

Synopsis: When Ted Balfour is convicted of a hit-and-run manslaughter, his wealthy family hires Perry Mason to clear his name. However, when an anonymous tip results in a new charge of first-degree murder, Balfour's family wants Mason to do everything he can to save the family name, even if it means allowing his client to wrongfully be convicted. 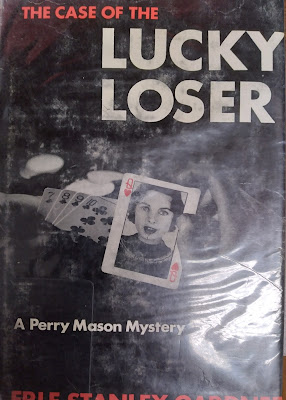 Review: My daughter's ice show is just a couple days away and, since I've been spending a great deal of time at the ice rink, I've managed to get a lot of reading in. This includes this Perry Mason mystery, which I finished yesterday evening. Overall, I have to say my opinion of it is a bit mixed.

I did find the overall mystery a bit intriguing, both because of the prosecution being allowed to try Mason's client for the same crime twice (despite that being unconstitutional) and because of the way things were being stacked up against him. This included the family's "fixer," Banner Boles, blatantly lying on the stand.

The mystery surrounding the victim's identity also proved to be interesting, especially when Mason learned the victim was supposed to have already died two years earlier. This raised a question about whether the victim faked his original death or if someone was impersonating him. And, I have to admit, Mason's reveal at the end was one I probably should have seen coming but didn't.

My one big complaint about this book is the way it leaves zero doubt about Balfour's innocence. The witness who resulted in him being convicted originally was obviously lying on the stand (and admitted as such later). Plus, Boles also told Mason the truth about what happened (or at least his version of it). While his clients are obviously most likely innocent regardless, it's still nice to have at least a little bit of doubt about it.

Also, at the risk of sounding like a broken record, I am still growing a bit bored with Hamilton Burger in these books. Not every case needs to involve him trying to "get back" at Mason and/or being there to gloat when he loses, especially when he isn't even the guy doing the prosecution. I especially found it a bit ironic when this case came down to Mason allegedly withholding evidence when the prosecution does the exact same thing in pretty much every case (if it's illegal for Mason, shouldn't it be illegal for them too?).

Final Opinion: The mystery did end up being slightly better than expected, mostly because of the surprise twist regarding the victim. Some elements in the book, however, especially regarding his client's obvious innocence, did keep it from being one of my favorites.