Book Review: The Case of the Gilded Lily by Erle Stanley Gardner (1956)

Synopsis: The wealthy Stewart Bedford is happy to be married to his much younger trophy wife, Ann Roann, who he loves to show off in social circles. When a blackmailer calls on him and threatens to expose his wife's criminal past, Stewart decides to cave into his demands, only to be drugged and wake up in a motel room with the blackmailer's body. Perry Mason is hired to defend him against murder charges however, there is one major problem, there is evidence Ann Roann was at the motel too and may be involved. 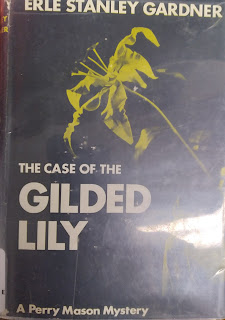 Review: My daughter has an ice show coming up in a few days and, since we've been at the ice rink a lot, I've had plenty of time to read. That includes this book, which I managed to finish up while waiting for one of her rehearsals to be over.

When I first started reading this book, I honestly didn't think I would like it all that much, mostly because the author decided to start out by telling the story from the victim's perspective and introducing Perry Mason later in the book.  I was concerned that decision would make the mystery a little too easy to solve, especially since it was clear his client was innocent (versus other books, where there is some doubt). However, it ended up being an enjoyable book after all.

I think the thing I found I liked about this book was there were a number of potential suspects. This included the blonde, Geraldine, who had accompanied the defendant to the motel on orders from the blackmailer, Stewart's loyal secretary, Elsa, who was once in a relationship with him and may still have romantic feelings, and his wife, whose fingerprints were found at the motel but was denying being there. All three were potential murder suspects and I wasn't convinced one of them also wasn't the person secretly behind the blackmail.

In fact, I have to admit the book stumped me. Normally I am at least good at guessing who the killer is, but I made three guesses while reading the book and was wrong all three times. Though, to be fair, there is a fairly decent red herring regarding the blackmailer's accomplice that I didn't catch because Mason's source seemed pretty credible.

My only real complaint about this book is similar to the one I made last time. The whole "let's show up Perry Mason" thing is getting a little old. In this case, it seemed like the only reason they were even attempting to prosecute Stewart was because Mason was his attorney since their evidence seemed a bit weak, at best. It would be nice to see more mysteries where the prosecutor's personal feelings aren't blatantly obvious.

Final Opinion: I didn't think this would be the case at first, but it ended up being a good murder mystery with plenty of obvious suspects and one not-so-obvious one. It's worth taking the time to read it.