Book Review: The Case of the Runaway Corpse by Erle Stanley Gardner (1954)

Synopsis: The mousy Myra Davenport and her domineering aunt, Sara Ansel, approach Perry Mason with a problem - Myra's husband, Ed, is dying and has written a letter to the district attorney falsely accusing her of poisoning him. Mason reluctantly agrees to help her, but things become even more complicated when Ed is declared dead, is later seen climbing out a motel window, and his body is found in a shallow grave sometime later. Further complicating things is Myrna is also accused of poisoning her cousin over an inheritance and her aunt, believing she is guilty, has already given damning testimony to the prosecution. 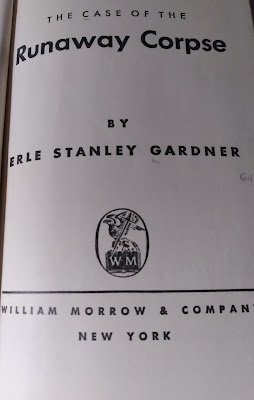 Review: After enjoying my last Perry Mason novel, I figured I would stick with the genre the next time I visited the library and picked out this book. To be honest, I wasn't sure if I would enjoy it all that much, mostly because some of the chapters were very long (one of them was 58 pages) and I have a habit of losing interest in a book if I can't take regular breaks (and I hate putting a book down mid-chapter). However, I gutted it out and it turns out I really enjoyed this mystery.

The thing I found most intriguing about this story was the weirdness surrounding Ed's death. At first, it seemed like he was simply faking his murder so he could get together with his secretary, and I continued to have doubts about whether or not it was really his body they found. Once that was confirmed, it just made the whole thing seem a bit ridiculous and I wondered, if he was really dead, then why go through the effort to make it seem like he was alive?

The other interesting thing about this case was the fact Myrna really seemed like the best suspect. Her husband seemed to think she was trying to poison him and, in addition to finding poison in the candy she gave him for his trip, her aunt witnessed her burying poison in her backyard. While I suspected she wasn't guilty, solely based on the fact Mason was representing her, she sure did go out of her way to make it look that way.

Her aunt, Sara, was also a bit of a wildcard in this book. At minimum, it was very hard to trust her, especially since she was quick to turn her niece into the authorities the second she saw something that made her seem guilty. More important, she was also the only other person that had any sort of motive to murder both the cousin and the husband, though I also suspected she was a little too obvious to be the real killer.

Another thing I liked about this book was the way it strayed a bit from Mason's normal cases and, instead of putting him up against a corrupt prosecutor who is willing to fabricate evidence, had him facing off against a district attorney that was fair but also very thorough. This presented him with a new challenge because it was clear the prosecutor truly believed Myrna was guilty and, at least at first glance, was going to be able to anticipate Mason's courtroom tricks. It was a small change from the normal format but enough to make the book somewhat unique as well.

Final Opinion: Other than the long chapters, I did find I enjoyed reading this book. It has a good mystery and a couple things that make it a little unique when compared to other Perry Mason books.