Book Review: The Case of the Fugitive Nurse by Erle Stanley Gardner (1953)

Synopsis: Shortly after Dr. Summerfield Malden dies in a fiery plane crash, his widow, Steffanie, hires Perry Mason to help her with an IRS investigation, only to accuse him of stealing $100,000 from her deceased husband's secret safe. Things become even more complicated for him when Malden's death is ruled a murder and he must defend Steffanie against homicide charges. His only hope is proving her husband is still alive and that involves tracking down his former nurse Gladys Foss, who has disappeared. 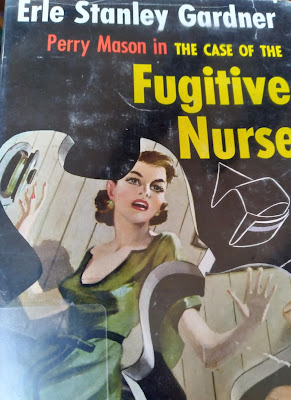 Review: It had been a while since I picked up a murder mystery at the library and, since I was there anyway, I decided to find one. Even though I haven't enjoyed every Perry Mason novel I've picked up, I figured I would stick with something familiar and, as it turns out, this was a decent one.

On the surface, this seemed like it would be a predictable book. Normally, if a murder mystery involves someone who is charred beyond recognition, odds are it isn't the right person. And, of course, this book took place decades before DNA evidence was a thing. However, while Mason suspected the same thing (or at least pretended to for the sake of his client), it sure did look like he was wrong, especially when his theoretically other victims kept showing up and were still alive.

I also found I enjoyed how much the uncertainty about the body impacted the court case in an almost comical fashion, especially when the prosecutors seemed to have just as much doubt about whose body it was, or at least their witnesses did. It really made me wonder, had the case made it to trial, if they could have even proven the murder happened.

The personal conflict between Mason and Hamilton Burger was also a nice side story, especially when their normal cat and mouse dual nearly turned into a fist fight. I wonder just how long Burger will remain his top rival in this book series since his competence surely must be getting questioned at this point, especially since this case was far from prepared.

My only real complaint about the book is I wish Sergeant Holcomb was featured more than just as a witness toward the end of the book. He is one of the few characters in this book I would consider a true rival for Mason and involving him more might have given the prosecution's case a bit more credibility.

Final Opinion: Some parts of the book were a bit predictable but, overall, it still ended up being a halfway decent mystery, especially since I was never fully convinced Mason actually believed his client's husband was still alive. I would recommend it if you are looking for something to read.