Book Review: The Case of the Glamorous Ghost by Erle Stanley Gardner (1955)

Synopsis: When Eleanor Corbin is arrested after running almost naked through a park, she claims to have amnesia about what happened to her prior to the event and her half-sister, Olga, hires Perry Mason to protect Eleanor's interests. Things become more complicated when Douglas Hepner, the man Eleanor claims to have married two weeks earlier, is found dead with Eleanor's gun hidden nearby. The district attorney seems to have an airtight case against her, and with Eleanor refusing to give up on her obviously fake amnesia story, Mason isn't convinced she isn't guilty. 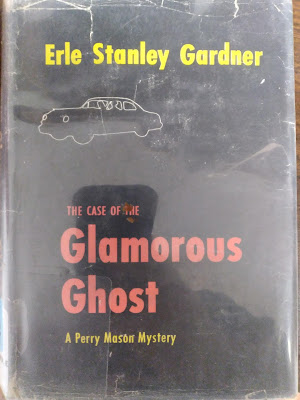 Review: I recently regained my enthusiasm for Perry Mason novels and, despite giving myself a short break by reading an Agatha Christie mystery first, made sure to check out this book while at the library. To be honest, I wasn't sure I would enjoy this book at first, but it ended up being one of Mason's most intriguing cases.

I think the thing I liked best about this book was the fact Mason himself was doubting his client. That's somewhat unusual for him, usually he assumes his client is innocent. However, Eleanor's constant lying, and omissions really did make it seem like she could potentially be guilty. There was a question about whether she and the victim really were married, witness testimony claiming she threatened to kill him, and fairly damning testimony from her roommate. Basically, the prosecution had a solid case without needing to resort to some of the underhanded tactics they've tried to use in other cases.

Even when she eventually comes clean and tells Mason the full story, it was easy to doubt her because her story seemed more than a little farfetched. Plus, since it was obvious Hepner wasn't being fully truthful with her, especially about wanting to marry her, it didn't rule out the possibility of her still killing him in a fit of rage. Heck, she even admitted to hiding the gun. This put Mason in a position where he was essentially stalling for time and hoping Hamilton Burger would make a mistake because he had no defense to present.

While I did have some suspicions about who committed the crime and they turned out to be correct, I also couldn't come up with the motive. I did, however, end up kicking myself when I missed a fairly obvious piece of evidence that was inadvertently presented by the prosecution.

My only real complaint about the book is I feel like it ended without closing up some loose ends. For example, I would have loved for the book to tell me how Eleanor reacted when she learned the real story and how her "fiancé" was manipulating her. Given everything she did to protect him, even as she was facing murder charges, I think the book left me hanging a bit.

Final Opinion: This is a good murder mystery and easily one of Mason's toughest cases. I'd recommend taking the time to read it.