Book Review: The Case of the Restless Redhead by Erle Stanley Gardner (1954)

Synopsis: While stopping at the courthouse in Riverside for some routine paperwork, Perry Mason helps an inexperienced attorney gain an acquittal on a theft charge for Evelyn Bagby, a redheaded waitress who aspires to be an actress. Mason takes things further and tries to get Evelyn a generous settlement from the actress who made the wrongful complaint but eventually needs to defend her against a murder charge. 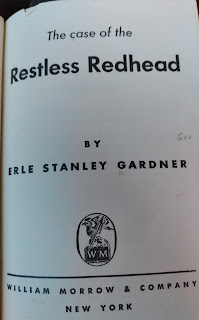 Review: I grabbed this Perry Mason book while at the library a couple days ago. Normally, it takes me at least a week to get through a novel like this but, once I started reading this, I had a hard time putting it back down and finished it in near record time.

The case itself honestly wasn't anything special. It wasn't too hard to figure out who the real killer was or their motivation for doing it. However, the courtroom strategy employed by Mason made the book worth reading.

Actually, to be honest, there were times when I wondered if maybe Mason's client was guilty after all. His strategy seemed to be geared more toward confusing the prosecution than trying to prove his client's innocence. This included him taking a very unusual step to seemingly tamper with evidence. This, alone, made me interested in the outcome because I was very curious about his motivations.

I also liked how he included the other defense attorney, Frank Neely. This gave the book an opportunity to effectively school the reader in Mason's basic cross examination strategy, showing the right way (his) at the same time as the wrong way (Neely) so it was easy to see a side-by-side comparison. If nothing else, it was something that made this somewhat unique from other books in this series.

Final Opinion: The case wasn't overly memorable when compared to some of Mason's other cases. However, Mason's unusual courtroom strategy did keep the book much more interesting than I would have expected and I enjoyed it as a result.