Synopsis: Even though he has made it clear he wants nothing to do with her after their failed wedding, Agatha Raisin is still determined to make things work with her neighbor, James, and travels to Cyprus to track him down. While there, she meets a group of obnoxious tourists and just can't seem to get away from them, even after finally finding James. When one of the tourists is murdered right in front of them at a disco, the stress from the investigation and Agatha's developing friendship with suave baronet Sir Charles Fraith make reconciliation with James even less likely. 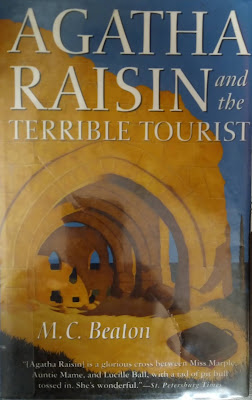 Review: My wife was able to access re-runs of one of her favorite shows and, as she binged watched those, I ended up reading this book in a relatively short amount of time. Overall, I thought it was an OK book though there were also some things I really didn't like about it.

As far as the mystery goes, I thought it was a decent one. The victim, Rose, was loud, obnoxious, and a bit of a flirt but there wasn't really anything about her that made her an obvious choice for a murder victim (just because someone is annoying doesn't mean you kill them). I also liked how she was murdered in a public place without Agatha or anyone else in the group seeing it happen. This made everyone a potential suspect.

The multiple attempts on Agatha's life were also interesting because there were so many potential suspects. This included James, who definitely didn't seem happy to see her and, at one point, seemed to be the only one with the opportunity to try to kill her.

My only real complaint about the mystery itself is I feel like the authorities should have solved this crime almost instantly, especially since the solution ultimately came down to the murderer's occupation. Based on what the police knew about the murder and their ability to get every last detail about Agatha (including who she recently slept with), it's a bit hard to believe they didn't figure this out simply by pulling employment records.

My bigger complaint about the book in general is the same one I had last time, this Agatha/James thing is growing a bit too disturbing in my opinion because he isn't just unemotional, he also manages to be downright abusive to his ex-fiancee. In all seriousness, he seems like someone who should be bad guy in a crime drama rather than a love interest that is worth pursuing. At one point in the book, she is afraid to be alone with him. That should tell you everything.

Not only is this "relationship" becoming a bit too dark for an otherwise upbeat book series, Agatha is just way too strong and independent of a woman to take that kind of abuse and keep coming back for more. I don't know whether to feel sorry for her or to be angry with her for not listening to EVERYONE else (including the killer) when they tell her she is too good for him.

In fact, I am actually kind of hoping the books eventually phase out James and focus a bit more on her "friendship" with Sir Charles. He's womanizer, not overly likable, and I don't fully trust the character but, at the same time, even he doesn't treat Agatha as poorly as the man she wants to marry.

Final Opinion: As I said, the Agatha/James saga is reaching a point where it really doesn't belong in this book series and I would love to see that go away but, overall, I thought the murder mystery made this book worth reading.