Synopsis: Nothing seems to be going right for Agatha Raisin on her wedding day. However, she is still determined to marry James Lacey even though she has doubts about whether or not he really loves her. Things go from bad to worse when Jimmy, the husband she told everyone was dead, interrupts the wedding, causing James to leave in embarassment and anger. When Jimmy is strangled to death later that evening, Agatha and James are the primary suspects and, despite their ongoing tension, must work together to find the real killer. 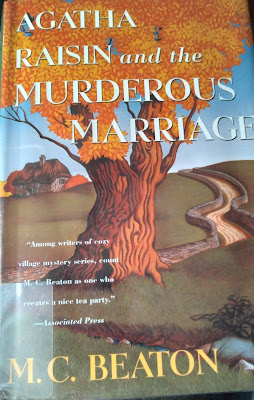 Review: After being a bit disappointed by the last Agatha Raisin mystery I read, I wasn't really sure what to expect from this one. However, it turned out to be an entertaining book.

I think the thing I liked most about this mystery was the way it did a decent job of keeping the door open regarding multiple suspects. This included the unfriendly woman who purchased Agatha's cottage and even James, who I kept on my suspect list solely because he could have been the killer. Even as suspects were eliminated as a result of dying, it seemed like there were still just enough to keep some doubt about who did it and why.

I also liked how Agatha and James were forced to work together and even live together as they tried to sort out the mystery. I think the tension caused by her lying to him about Jimmy and his somewhat harsh reaction kept the story from becoming dull because it was hard to tell when a comment might turn into something that hindered the investigation or cast additional suspicion on either one of them.

That being said, as this book progressed, I did find I wasn't a huge fan of the way Agatha still seems to be pining over her neighbor. For someone that that is independent otherwise, she seems to be in an awful big hurrty to get another man in her life.

And, I'm sorry, other than not being a drunk, I don't know if James is really any better than her first husband. He was quick to abandon her when things got ugly and it is obvious she doesn't even know that much about him, especially when it comes to his expert ability to pick locks. I don't know if she can do better but I do think he isn't good for her and kind of wish the books would just get rid of him.

Final Opinion: I liked this mystery a lot more than the last one I read and would recommend the book as a result.