Synopsis: When a new veterinarian, Paul Bladen, sets up shop in Carsley, the village women swoon over him and even Agatha Raisin, still hurting after her neighbor, James, rejected her, falls for his charms. She's even willing to go on a date with him despite his obvious dislike and cruelty toward dogs and cats. When Bladen dies while performing surgery on a horse, the authorities believe it is an accident but Agatha, believing it is an opportunity to get closer to James, convinces her neighbor to help her investigate it as a murder. 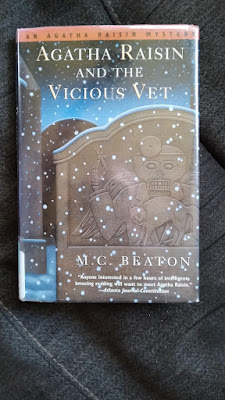 Review: Even though there was part of me that was still a bit skeptical about this series, I did enjoy the first Agatha Raisin book enough to at least try a second one and wound up checking this one out from the library a few days ago. I have to admit, after reading this book, I am now hooked.

I honestly am not sure what I enjoyed more about this book, the mystery or the comical investigation being conducted by Agatha and James, which consisted of Agatha trying to make him fall in love with her while James, a confirmed bachelor, was willing to keep as much emotional distance as possible.

OK, that's actually not that hard of a decision, it was definitely the mystery. The list of potential suspects in his death seemed almost endless, especially when the book reveals both a financial and emotional motive shared by several people in the village. And, while Agatha was convinced Bladen was murdered, she didn't have any way of proving it wasn't just an accident, even after there is a second death.

The book even manages to build up a bit of suspense involving Agatha's cats toward the end, adding a whole other element to the story. In fact, I started out reading the book a chapter at a time but, when things started heating up, finished the last few in one sitting just to see what would happen.

My only real complaint about the book is the way it describes Bladen's death as it happens, making it obvious to the reader he was murdered. While not a huge deal, I think the book would have been slightly better had that been left up in the air, creating some doubt about whether or not Agatha wasn't just imagining things.

Final Opinion: This was a fun and interesting murder mystery that I enjoyed reading from the first page. I'd recommend taking the time to read it.