Book Review: Agatha Raisin and the Quiche of Death (1992)

Synopsis: Agatha Raisin decides to retire early and move from London to the small village of Carsley. Determined to make an immediate impact on the village, Agatha signs up for a quiche competition and, to ensure victory, submits a store-bought quiche as her own. Unfortunately for her, the competition is rigged and she doesn't win. More importantly, the competition judge, Mr. Cummings-Browne dies later that evening, her quiche is named as the cause. Horrified about the death and embarrassed after being outed as a cheat, Agatha is determined to prove the death was caused by a murderer. 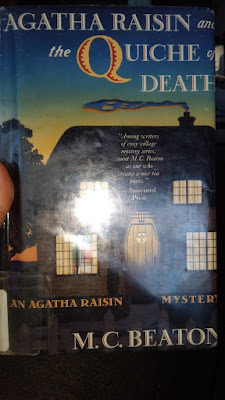 Review:  To tell you the truth, I've been a bit reluctant to read M. C. Beaton's Agatha Raisin series because I was a big fan of her other detective, Hamish Macbeth, and was concerned this detective would pale in comparison.  However, after several disappointing books in a row (which I couldn't even finish), I decided to go back to a familiar author and was not disappointed.

First of all, I have to say I liked Agatha. She was, to put it kindly, a proud woman and, to put it more accurately, was both arrogant and kind of stuck up. As a result of this, it was easy to feel as though she deserved pretty much every bad thing that happened to her and that helped keep things light hearted and a bit funny even as her murder investigation progressed. More books need to have protagonists who aren't necessarily good people.

The murder mystery itself was also intriguing because Agatha's motivation to redeem herself meant it was very possible the death was just an accident and she was grasping at straws. At minimum, it meant she had to have rock-solid evidence to prove she wasn't just trying to clear her name. Plus, if it was a murder attempt, as was mentioned in the book, the murderer would have to predict a lot of relatively random things happening, including Agatha not taking her quiche home with her after the competition.

I also thought the book did a reasonable job introducing the other residents in Carsley. This is the type of thing that could potentially bog down a book and make it drag on but, in this case, the introductions were long enough to give the reader a feel for the type of person Agatha was dealing with but brief enough to keep the plot moving. That's always a big plus for the first book in a series which (in my opinion at least) usually turns out to be one of the weaker ones.

Final Opinion: This is an entertaining and funny murder mystery that is worth taking the time to read if you have a chance. I'm glad I finally checked it out at the library.