Synopsis: When charwoman Mrs. McGinty is murdered, her lodger, James Bentley is arrested for the crime. Even though Bentley was convicted by a jury, the soon-to-be-retired Superintendent Spence has doubts about his guilt and turns to Hercule Poirot for a second opinion. Poirot agrees to investigate but the only thing that points him in the direction of another killer is an inaccurate newspaper clipping referring to other crimes. Did Mrs. McGinty know somebody's secret? 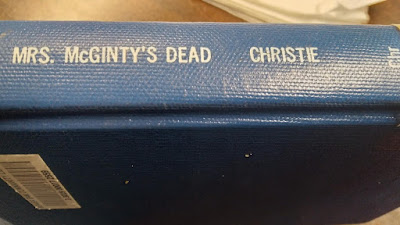 Review: I was under the impression I had read all of Christie's Hercule Poirot novels until I happened to come across this one at the library a couple weeks ago. I checked it out and wound up finishing it last night. Overall, I have to say I thought it was a decent book.

There were a couple things I found I liked about this murder mystery. One of the main ones was the question about whether or not there really was another killer. Despite Spence's doubts, her lodger was found with money stolen from her floorboard and the jury had no issue convicting him. And, frankly, some of Poirot's "evidence" seemed to be more of a desperate attempt to find an excuse to keep investigating rather than anything else. Heck, if it weren't for the attempt on his life, I probably would have had doubts until the very end.

Another thing I liked about this book was how, even when the real motive for the murder seemed to be revealed, it was done in a way that still created multiple suspects. Not only could the murderer be tied to one (or possibly more) previous homicide cases, that person's age and appearance could fall somewhere in a wide range of possibilities. This made just about everyone who knew Mrs. McGinty a suspect.

I also found I enjoyed the ending of this book, with Poirot going out of his way to make it look like he suspected one person before revealing who the real killer was. And, I'll be the first to admit, I didn't guess who (or even what gender) the killer was.

My only real complaint about the book is the one I have with a lot of the later Hercule Poirot mysteries, Ariadne Oliver. I've never liked this character all that much and it was all I could do to keep from skipping over the chapters that featured her, especially since I felt like her appearance was a bit too coincidental/forced. I was just glad she didn't have as much of a role in this mystery as she did in some of the other ones, otherwise I might not have gotten through it.

Final Opinion: It was a good mystery and I did find I enjoyed the book as a result. However, I will deduct a grade because of Ariadne Oliver's inclusion.