December 01, 2017
Synopsis: After 18 months in Argentina with his new wife, Captain Arthur Hastings returns to England and is reunited with his detective friend, Hercule Poirot. Ironically, when he meets up with Poirot, he learns his friend has accepted a well-paying job in South America and is about to board a boat. However, before he departs, Poirot suddenly changes his mind because he realizes the job offer is a ruse by a criminal group he has heard about called the Big Four and believes they are trying to get him out of the way. With Hastings' help, he chooses to stay in Europe, discover the group's identities and plans so he stop them, even though it means putting their lives in danger. 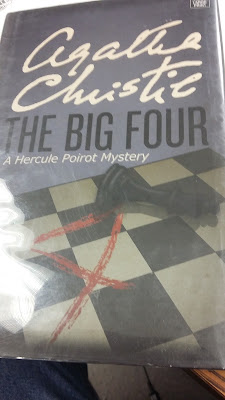 Review: Ever since I started working my way through Agatha Christie's novels, I have had nothing but positive things to say about her as a writer. In fact, when I began reading this book earlier this week, I had high expectations for it simply because she had yet to disappoint me. Unfortunately, this particular Hercule Poirot novel just didn't impress me as much as I thought it would.

When I think Poirot, I imagine him investigating an impossible-to-solve murder. This book, however, was less of a mystery and more of a spy novel and mostly consisted of him trying to catch the already-known bad guy while making an effort to stop the world-domination efforts of the group he worked for. Yes, there were still a couple murder mysteries for him to solve. But, they all proved to be relatively easy for him to figure out and just didn't have as much of an impact (in my opinion at least) that they should.

To be fair, the concept wasn't a bad one. It's just I've grown to respect Poirot and his detective work and, at times, I just felt as though his talents were wasted in this novel. And, while someone could argue he was the only detective smart enough to take on the Big Four, I still think the story would have been just as good with someone else (perhaps Hastings investigating on his own?).

I think my biggest pet peeve with this book is the way Poirot and Hastings kept getting captured by the Big Four only to find a way to escape. If that happens once, it's entertaining. After the second and third times, it got a bit redundant. I mean, in all seriousness, if Poirot was such a threat, why didn't they just kill him right away rather than drawing things out and giving him a chance to escape?

I also wasn't overly impressed with the novel trying to throw the reader off with Poirot's alleged twin brother, Achilles. It wasn't hard to figure out what was really going on and, mostly because it was introduced so late, it had little or no impact on the actual story. It's something that could have easily been cut out and nobody would have missed it.

Final Opinion: It's not a horrible novel. But, it is definitely my least favorite (so far) Agatha Christie novel and definitely one that should not have starred one of her most famous characters.