Book Review: The Big Bang Theory: The Definitive, Inside Story of the Epic Hit Series by Jessica Radloff (2022)

Synopsis: This non-fiction book uses interviews with cast members and various others to tell the inside story of The Big Bang Theory, an unexpected hit series that ran for 12 seasons. 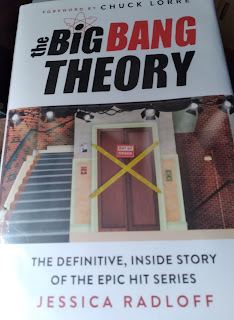 Review: Even though I didn't first watch it until after it was off the air, The Big Bang Theory has become one of my all-time favorite television shows and I don't think I've gone a week without watching at least one re-run. When I saw this book advertised, I wound up requesting it through my local library as a result. Overall, I have to say I was happy with that decision.

The book wasn't what I was expecting it to be. I figured it would just be your normal non-fiction book that tells the story with the occasional cast member quote thrown in. Instead, the author lets the people who were involved with the series tell the story for her. The end result is a book that reveals a lot of intimate details and some funny anecdotes you may not otherwise have gotten.

For example, the book spends a lot of time talking about the off-screen relationship between Johnny Galecki and Kaley Cuoco, how they tried to keep it secret for as long as possible and how series creator, Chuck Lorre, was concerned about the relationship going south and possibly ruining the show. The book also gives quite a bit of detail about the horse-riding accident that nearly cost Cuoco one of her legs, how the series worked to hide the injury and the new rules that were put in place in the aftermath. The part about Melissa Rauch's miscarriage and how the producers went out of their way to keep her stress level down when she got pregnant again was as interesting as how the writers went out of their way to show some of the real emotions and ramifications pregnant women face.

I think one of the more intriguing stories from the book, in my opinion, was the show's decisions regarding Howard's (Simon Helberg) estranged father. This included a failed attempt to bring in a famous musician to play the role, something I personally think would have been an awesome twist had it worked out. Of course, the part about the decision to have the non-physical Sheldon (Jim Parsons) finally sleep with his long-time girlfriend, Amy (Mayim Bialik) was as funny as the episode itself.

The interviews showed some very raw, negative emotions at times too. The final salary negotiations, with some cast members taking a pay cut so others could get more money seemed a little ridiculous considering the show's success. And you could tell from the interviews some of the cast members weren't too happy about the show's cancellation, which they claim was solely the result of Parsons not wanting to return. Again, stuff like that is a lot more impactful when the information is coming directly from the source.

Final Opinion: This is an interesting and easy-to-ready book that I enjoyed from start to finish. Even if you aren't a fan of the series, it's worth taking the time to read.