Synopsis: In the 1990s, Matthew Perry's star was rising by being part of the number one show on television and offers to start in multiple movies. However, he had a secret drug and alcohol addiction that threatened to derail his career, cost him various relationships and nearly killed him. This autobiography tells the story from his perspective. 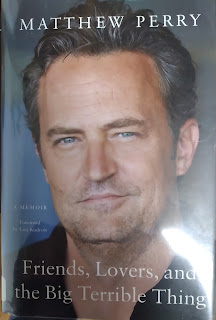 Review: I am a big fan of autobiographies and my wife and I are fans of the show Friends. So, when I saw Matthew Perry was publishing a book about his well-publicized drug and alcohol addiction, I made sure to add myself to the waiting list at my local library. I finally had an opportunity to read the book and it exceeded my expectations.

I think the best thing I can say about this book is it did a great job debunking my preconceived notions about drug addiction. This probably shouldn't be the case, but whenever I think about drug addicts, I think of people who lie around the house all day, unable to hold a job and spending most of their time looking for their next fix. I don't think of someone who can swallow 50+ pills per day, go out binge drinking with Bruce Willis and still be a successful actor, which basically describes Perry.

He also does a great job of explaining his addiction in ways that make it easy for a non-addict to understand. He turned to drugs and alcohol because he felt a void, even after his acting career took off. He ended relationships with the people who were helping him because he was paranoid about them eventually leaving and sending him into another downward spiral. He spent millions on rehab clinics because even the slightest thing can trigger a relapse. It definitely made it easier to understand why someone who was, at one point, dating Julia Roberts would still feel the need to get high or drunk.

I also thought his introduction, where he talks about his near-death experience, was intriguing because it demonstrated how people can sometimes focus too much on the addiction and forget the addict is a person too. In his case, he nearly died because the people at his rehab center assumed he was looking to score pain killers and didn't even consider he was really sick and needed to go to the hospital. In fact, it kind of opened my eyes a bit about rehab centers in general, making me wonder how many are trying to scam people when they are at their worst (which Perry also suggests) rather than try to help them.

Final Opinion: This is a solid book that serves as a real eye opener as far as addiction goes. I highly recommend taking the time to read it, even if you aren't a fan of the show Friends.