Book Review: Agatha Raisin and the Wizard of Evesham by M. C. Beaton (1999)

Synopsis: When Agatha Raisin tries a new hairdresser, Mr. John, she both enjoys how he styled her hair and the way the handsome man flirts with her. However, while out on a date with him, she notices the fearful way one of the village women looks at him and begins to suspect he is a blackmailer. With the help of Sir Charles, she comes up with an elaborate plan to investigate the hairdresser by pretending to be his next mark, but things become more complicated when John is poisoned, and someone tries to burn down his house while Agatha is in it. When John dies, Agatha becomes one of the primary suspects. 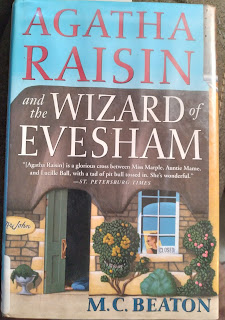 Review: It's been a while since I've tried an Agatha Raisin book, mostly because I wasn't too thrilled with the series. However, I was looking for something to read while at the library and, since I was familiar with the character, decided to give her another try and, overall, didn't hate the book.

I think the thing I liked best about this mystery is how the book doesn't tell the reader too much about the mysterious Mr. John. There is a lot of circumstantial evidence to support Agatha's theory about him, including the fact he had obviously been beaten up by someone prior to being murdered, but there wasn't enough to draw a definite conclusion about his past. He could have been a bad guy or just an innocent victim. This, in turn, made it a little harder to figure out who the killer was, especially since the poison could have come from anyone.

Agatha (once again) being in the wrong place at the wrong time also added some entertainment value to the story. Her being in his house at the time it was set on fire was bad enough. Her destroying evidence and telling lies that could easily be disproven only served to make her look guilty of something. In fact, I'm a little surprised she wasn't charged in connection to the destroying evidence part (maybe if she wasn't friends with the local police).

I also appreciated the way the book kept some sexual tension between her and Sir Charles but didn't follow through with it. One of my biggest complaints about the character is she often seems a bit too needy, especially when it comes to men. Her showing some restraint and not sleeping with someone (especially Sir Charles, who obviously doesn't have any romantic feelings for her) for a change showed a little bit of growth, though somehow, I doubt it will last.

Final Opinion: I'm undecided if I will read any other books from the series but this one did end up being better than expected and I enjoyed the mystery surrounding Mr. John.