Book Review: The Case of the Fenced-in Woman by Erle Stanley Gardner (1972)

Synopsis: When Morley Eden purchased two parcels of land from Loring Carson and built a large home, he didn't know Carson's soon-to-be ex-wife, Vivian, had joint ownership of one of the parcels. When an attempt to discredit her as part of the divorce hearing fails, the judge awards her part of Eden's new home, and the ex-model takes full advantage of the ruling by running a barbed wire fence through the property and going out of her way to torture the bachelor by wearing skimpy bathing suits when in their shared pool and inviting other models over for lingerie shows. Perry Mason agrees to represent Eden but, when Loring Carson is found murdered, is forced to defend both him and Vivian against the charges. 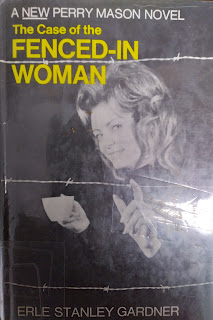 Review: I checked out this book from the library a couple weeks ago and, right away, became a bit concerned when I learned it was published after Gardner's death and saw the disclaimer saying it wasn't edited up to his usual standards. However, after finishing it yesterday evening, I have to admit it was one of the better Perry Mason novels I've read and was definitely better that most of Gardner's later books.
There were a couple things I liked about this book. The first was the whole barbed wire fence angle that truthfully got me hooked. Even without the murder mystery, I would have read the book just to see how that worked out since it was hard to get a read on Vivian and tell if she really did have some interest in Eden romantically (as appeared to be the case) or was just playing him to get revenge on her ex-husband.
The other thing I liked about this book was, unlike too many Perry Mason novels, it really did seem like Mason's clients were guilty. They had motive, the murder occurred in their house (and likely involved a woman for at least part of it) and there was plenty of evidence that supported the theory. There were other suspects, like the woman who had her reputation ruined as part of Loring's efforts to discredit Vivian, but they seemed like red herrings.
In fact, even Mason didn't seem like he thought his clients were innocent, even after getting them acquitted with some courtroom razzle dazzle. As I've said before, mysteries like this are a lot better if you don't know for sure if his client isn't really the killer.
As the warning indicated, I did think the book could have used some editing, mostly because some of the chapters were drawn out to the point I found myself skimming rather than reading them. But, given the circumstances and the fact I did like the overall mystery, I will overlook that. I do, however, wonder how good this book could have been had he had an opportunity to perfect it.
Final Opinion: I'm on the fence (no pun intended) about reading Gardner's final Perry Mason novel since this was the first one I've truly enjoyed in some time and would hate to end the series on a disappointing note. However, this is a book I do recommend taking the time to read.
My Grade: A
books classic books classic mysteries murder mysteries perry mason