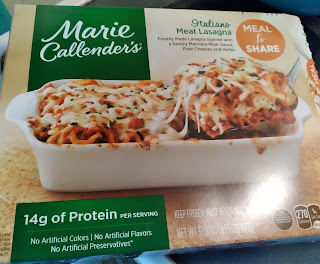 I wasn't in the mood to cook last night so, since I had to stop at the grocery store anyway, I decided to pick up a frozen lasagna as a way to keep things simple. Normally, I would just buy the one from On-Cor because, while it isn't necessarily the highest quality, it is also less than $5. However, I saw this one in the freezer section too and, even though it was about $3 more, decided to give it a try.

After making it, I am convinced I should have stuck with the On-Cor brand.

Just to be clear, I didn't necessarily hate this lasagna. It did, after all, succeed in giving me what I was looking for - a dinner that was convenient, filling and didn't taste terrible. I just think I spent more money on something that wasn't any better than the cheaper alternative.

The very first thing I noticed about this product when I took it out of the microwave was the way it looked nothing like it did on the box. This isn't unusual. However, there was a very noticeable lack of cheese, especially when compared to the picture above. 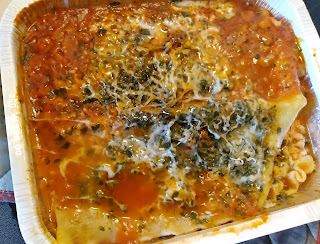 Also, while it had an OK flavor (maybe just a few too many spices), the sauce was very watery. In fact, when I removed slices of this from the pan, most of the sauce remained in the bottom and needed to be scooped out with a spoon. Again, this isn't uncommon, I would expect the same from the On-Cor brand, but if I'm paying more money, I do expect some improvement when it comes to simple things like that.

Final Opinion: If this would have been even slightly better than the On-Cor brand, I would have given this product a better grade. The fact it was basically the same as I would expect from that other brand and was $3 more expensive, makes it difficult for me to recommend it.