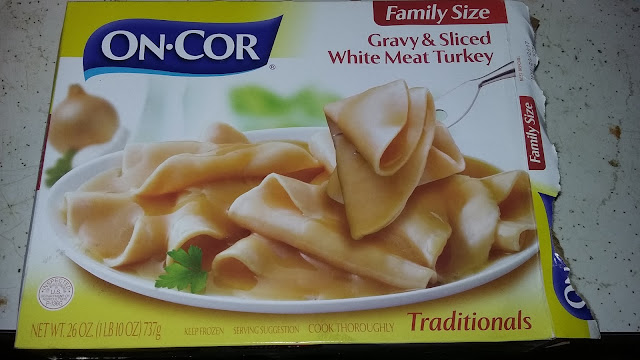 My oldest daughter had figure skating yesterday evening and her younger sister had dance. As a result, I planned on making an early dinner for everyone. However, because the girls also had an afternoon dentist appointment yesterday, we ended up having a late lunch and, knowing nobody would be hungry for an early dinner, we decided to just find something to eat after the girls were done with their extracurricular activities.

The kids wanted to have ramen noodles for dinner so I ended up looking for something for my wife and me. After some consideration, I made this product.

I purchased the On-Cor turkey dinner a couple days ago while doing some other grocery shopping, mostly because I figured we would end up having a day like yesterday and would need something that was easy to make. And, the fact this was less than $4 helped with that decision. After having it, my opinion of it was a bit mixed.

I'll start out by saying the dinner did prove to be much more filling than I was expecting it to be. I grew up watching the classic On-Cor ads (the ones that said the meals were so large, you needed a family to eat them) and always thought they failed to live up to that hype. However, it did work out pretty well as a meal for two.

I also thought this was easy to prepare. All I had to do was cook it in my microwave for about 15 minutes and it was ready to be served. As I've said before convenience will always score points with me, especially on days when we are busy.

As far as the overall quality goes, I thought it was OK but not overly great. As my wife stated, the turkey tasted a bit "fake" and the sauce, while not terrible, was a little salty. In other words, it was edible, but there wasn't anything about it that would make me mistake it for something that was homemade.

Final Opinion: It is  worth considering because of the low price. But, you don't get more than your money's worth with this product.