Book Review: The Case of the Troubled Trustee by Erle Stanley Gardner (1965)

Synopsis: When Kerry Dutton was given the task of managing a trust set up for a naive and irresponsible heiress, he made some moves with the money that made her more financially secure but also crossed some legal lines that could be construed as embezzlement.  He hires Perry Mason to help protect him when he comes clean but instead needs the lawyer to defend him against murder charges. 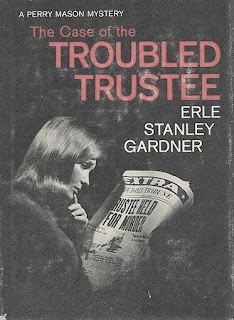 Review: I had planned on taking a break from Perry Mason books. However, the library didn't have the book I was interested in reading and, while waiting for it to come in, I checked this one out. Unfortunately, the book did nothing to offset my recent disappointment with the series.

This was a book I frankly had a hard time getting interested in to begin with. The talk about his client's misuse of trust funds was something I found to be kind of dull, even though there was a good chance he was lying to the lawyer and was really trying to embezzle the money. I think a big part of this was because that part just seemed to drag on longer than it needed to be, especially since it wasn't too difficult to figure out he was going to be charged with a murder the second one of Paul Drake's detectives saw him fleeing a golf course.

I kept hoping the book would be better once Mason's client was charged and the case went to trial. However, even that part of the book (which is usually my favorite) just seemed to re-use a formula that had been used in multiple other cases, with the trial seeming to be more about trying to prove Mason was guilty of something than of trying to convict his client. And to be honest, I'm still not 100 percent sure why the prosecution doesn't pursue criminal charges against Mason regardless of the outcome of the murder trials. There have been multiple times when it would have made sense.

Even the ending is a bit anti-climactic because it doesn't happen in the courtroom and the efforts to catch the real killer happen after it becomes fairly obvious who they are trying to catch. I like Lt. Tragg as an antagonist. If he's just going to help Mason, what's the point in having him?

Final Opinion: The book I was waiting for finally came in so I can take a break from reading Perry Mason for a while. However, to be honest, I'm not 100 percent certain I'll finish up the last few books.