Book Review: The Case of the Horrified Heirs by Erle Stanley Gardner (1964)

Synopsis: When Virginia Baxter is arrested after drugs are found in her luggage at the airport, she suspects her estranged husband of setting her up. However, when the former legal secretary is approached by a stranger asking her to help him forge a will for the wealthy Lauretta Trent, Perry Mason suspects the two things are related and uncovers an attempt to murder Lauretta using arsenic. When Lauretta's car is later forced off the road and she is presumed to be dead, the evidence points to Virginia and Mason must defend her against murder charges. 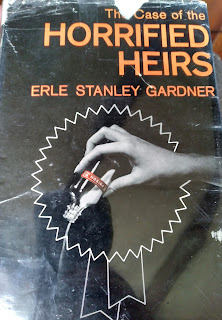 Review: I haven't been a big fan of many of the Perry Mason books I've read recently, and, because of that, I had a bit of skepticism when I checked this one out from the library last week. I finished it over the weekend and, while it still wasn't one of my favorites, it was admittedly better than some of them.

I thought the overall premise was intriguing, especially how Mason starts out defending Virginia from one accusation and ends up connecting it with a completely different person whose life is in danger. There was also a nice mystery about who was trying to kill Lauretta Trent and why they felt need to discredit Virginia/set her up for murder considering she had only met the victim one time when she was still employed as a legal secretary. The twist involving her misidentifying the chauffer added to that mystery.

The book does have one of the same flaws as many other Perry Mason mysteries, while there was some evidence pointing toward his client, the prosecution's overall case was weak at best. Not only did they not have a good theory about why she wanted to kill Lauretta (she just signed the will as a witness and wasn't a beneficiary), there was plenty of other evidence pointing toward someone else, including the arsenic poisoning and an attempt to bribe Virginia into creating a forgery of Lauretta's will. In other words, it was one of those cases that made me wonder how any judge would feel there was enough evidence to bind her over for trial when it would be difficult for a jury to convict her.

I'm also a little confused about why Mason himself ended up getting off without even a slap on the wrist. His client may have been innocent of murder, but he was certainly guilty of tampering with evidence. Even if Virginia wasn't in the car that ran Lauretta's car off the road, it was still the vehicle used in the crime. I kind of feel like Hamilton Burger finally had a case against the attorney and just chose not to pursue it for unknown reasons.

Final Opinion: As I said, the book was better than some I've read recently. However, there are still things about the case, including the lack of solid evidence against his client, that keep it from being one of my favorites.