Book Review: The case of the Phantom Fortune by Erle Stanley Gardner (1964)

Synopsis: When Horace Warren wants to pay Perry Mason $500 to attend a dinner party, the lawyer isn't interested but ultimately accepts because Della Street wants to go. Horace is concerned his wife, Lorna, is the victim of a blackmailer and wants Mason to size up the guests. He even agrees to let Paul Drake pose as a caterer so fingerprints can be collected. Mason ultimately tracks down the blackmailer but, before he can confront Collister Gideon, Horace is accused of murdering him. 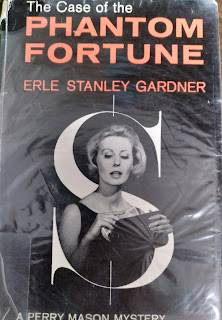 Review: As I near the end of this book series, I keep hoping I find one last gem that reminds me why I became a Perry Mason fan to begin with. Unfortunately, this book was yet another disappointment for me.

There were two things I found I really didn't like about this book. One of the main ones was the fact it took until chapter 15 of a 22-chapter book for the murder to happen. Even under ideal circumstances, the murder investigation would have felt rushed.

Even after the murder does occur, the focus seems to be less on Mason's client and more on Mason himself, with Hamilton Burger committing a lot of time and resources toward proving Mason tampered with a witness to a different and seemingly unrelated crime. Even the preliminary hearing seemed to be centered around that action.

In all honesty, even if the book hadn't spent so much time on Mason's tampering charge, I'm just not sure the murder mystery would have been good enough to make this book even remotely memorable. As has been a problem with other books, there didn't seem to be any real sense of urgency. Horace was the primary suspect but there didn't seem to be anywhere enough evidence to convict him, especially since the forensic evidence couldn't prove it was his gun that committed the murder, and the prosecution couldn't even give a reasonable guess about the motive. Not to mention, there were other people who could have done it, including his wife.

I also feel like this book cut corners when it came to the investigation. It's one thing to have a seasoned veteran like Lt. Tragg miss a not-so-obvious clue. It's another thing to have him not make any effort to investigate a crime scene because he didn't want to make a security deposit to have the electricity turned on. Really? It's not like he had an air-tight case that couldn't use more evidence. Paying to have the power turned on seemed like a lousy excuse.

The surprise twist at the end also didn't help much, mostly because it wasn't too hard to figure out the armed robbery was somehow related to the murder. Otherwise, why would the book spend so much time on it?

Final Opinion: This might have been an interesting mystery had the book spent more time on the murder and less time on Hamilton Burger's quest to convict Perry Mason of something. Instead, it was just too predictable to be entertaining.