Book Review: The Case of the Amorous Aunt by Erle Stanley Gardner (1963)

Synopsis: When Linda Calhoun is concerned about her aunt, Lorraine Elmore, being romantically involved with Montrose Dewitt, Perry Mason recommends she talk to Paul Drake. However, he eventually decides to get involved and try to stop the aunt's impending wedding too. However, when Dewitt is murdered, Lorraine becomes the primary suspect and Mason, with the help of a young defense attorney, decides to defend her. 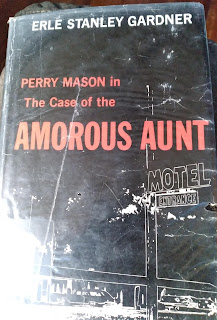 Review: I haven't been overly impressed with many of the Perry Mason novels I've read and hoped this one would be one of the exceptions to that. Unfortunately, that didn't turn out to be the case.

This book has the same problem as many other Perry Mason books I've read recently. Yes, there is evidence that connects the aunt to the murder but there is no reason why she should have been considered the only suspect. Both her niece's boyfriend (who Mason didn't like) and the aunt's business manager were at the hotel at the same time the body was found. On top of it, $50,000 in cash went missing (and wasn't on the aunt) and Aunt Lorraine's story about being driven out to the desert and being forced to walk back was supported by the evidence.

As has been the case with too many novels from this series, the prosecutor seemed to only want to charge Aunt Lorraine because Mason was her attorney. Even as the case was presented in court, it didn't seem like he had anywhere enough evidence to receive a conviction.

Ultimately, the case itself was a bit too predictable. It wasn't difficult to figure out who took the money and who killed the victim, though I admittedly didn't know the killer's motive (to be fair, there really wasn't one, it seemed to be almost random). I was even able to predict what would happen between Linda and her loser boyfriend/fiance and that was probably the least interesting thing about this book.

Final Opinion: Truthfully, I've been somewhat underwhelmed by some of the later books in this Perry Mason series. I think this case could have had some potential if Aunt Lorraine seemed like the only possible suspect but, unfortunately, that didn't happen.