Book Review: The Case of the Stepdaughter's Secret by Erle Stanley Gardner (1963)

Synopsis: Harlow Bancroft comes to Perry Mason with a problem. He has received a blackmail letter and, believing someone has found out about his criminal past, is worried the blackmailer will ruin his stepdaughter, Rosena's, upcoming wedding. Mason agrees to help him out, even after learning the blackmailer actually has information about Rosena's fiancé's family. When things escalate and Bancroft's wife, Phyllis, is forced to shoot at one of the blackmailers in self-defense, Mason finds himself defending Phyllis against murder charges. 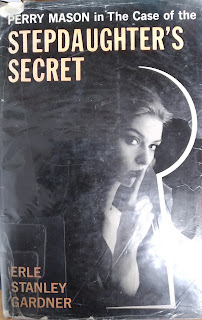 Review: While I am determined to get through the remaining Perry Mason novels, I am finding many of the later mysteries just aren't as good as the others. Unfortunately, this book fell into that category.

There are a couple things I found were disappointing about this book. One of the main ones is the title is very misleading. First, the stepdaughter isn't even the person hiding a secret, her future husband's family is and it's not a very well-kept secret considering her mom also knows about it. On top of it, the stepdaughter isn't even an important character in the story. She gets maybe a chapter, then you don't see or hear from her again until the very end.  Heck, Mason's operative, Eve Amory, gets more pages dedicated to her and all she did was retrieve a coffee can full of money.

The same can be said about his defendant, Phyllis. For someone who is supposed to be his client, Mason didn't spend a whole lot of time talking to her. Most of his information came from her husband.

As a result of this, I never felt like I was invested in any of the characters, especially since Phyllis' self-defense story seemed perfectly plausible and the police weren't finding any evidence to contradict it. In fact, had she gone to trial, I'm just not convinced she was in any real danger of getting convicted considering the police didn't even have the gun.

It also didn't help that the blackmailer's information seemed a bit "dated." A relative with a criminal record was maybe scandalous back when this book was written but seems par for the course today and certainly not something that would be worth having people believe you murdered someone. I kind of feel like the book might have been slightly better had it not revealed what information the blackmailer had and left that up to the reader's imagination.

I also think the book would have been considerably better if Mason would have had a more controversial client, such as one of the blackmailers. At least then, there would have been the possibility of his client being convicted solely on the fact he was a blackmailer and would be much more likely to murder someone than a housewife who was afraid of her daughter being embarrassed.

Final Opinion: I think the book had some potential based on the premise but failed to capitalize on it by putting too much focus on the characters who weren't charged with murder and having a "secret" that was a bit too bland to be entertaining.