Book Review: The Case of the Spurious Spinster by Erle Stanley Gardner (1961)

Synopsis: Already forced to work overtime on the weekend, Sue Fisher is less than thrilled when she is also asked to watch her boss' son. When the young boy brags about a "treasure" box he had gotten from his dad, a curious Sue looks inside and discovers thousands of dollars in cash. However, before she can do anything more about it, she learns Amelia Corning, the arthritic and blind company owner, has arrived two days early and she needs to pick her up and bring her to the office. When Amelia disappears with the company's sensitive papers and possibly the box of money, Sue relies on Perry Mason to defend her against pending embezzlement charges. However, when a body turns up and the evidence points to his client, Mason must defend her against murder charges too. 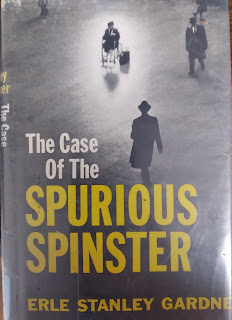 Review: I didn't expect to finish this book over the weekend but, to my surprise, I was able to find time to read it in its entirety in a little over a day. Unfortunately, as far as Perry Mason murder mysteries go, this one did end up lacking something.

At first, this seemed like it would be an entertaining mystery, especially when the evidence pointed toward an imposter posing as Amelia Corning but no evidence to support Sue Fisher's story. Her boss, who appeared to be doing something crooked, also went out of his way to make her look guilty, something that definitely didn't help her.

However, as the story progressed, it wasn't overly difficult to figure out who was behind everything, including the box of cash. I guessed at who the box really belonged to long before Amelia showed up and, as more clues and testimony were revealed, it only supported that theory. In fact, I was kind of surprised Mason didn't figure it out a whole lot quicker than he did.

One redeeming thing from this book had to be Lt. Tragg. As I've said before, he is one of my favorite characters because, while he can match Mason intelligence-wise, the fact he is a straight-shooter also leaves the door open for him to either be helpful or hurtful to Mason's case. Some other books don't take advantage of that but this one definitely did, and it was interesting to see him bounce between being an ally and an enemy as the investigation happened.

I also loved the cat and mouse game Mason ends up playing with him, especially when it came to the rental car his client had used and, instead of wiping prints, Mason went out of his way to add more fingerprints. It had to be one of the most memorable things about this book. Unfortunately, the rest of the story doesn't live up to it.

Final Opinion: It's an OK story overall, but the mystery was a little too easy to figure out and, because of that, there were no real surprises. I didn't hate it, but it also wasn't one of my favorites.