Book Review: The Case of the Shapely Shadow by Erle Stanley Gardner (1960)

Synopsis: Confidential secretary Janice Wainwright comes to Perry Mason with an ethical dilemma. Her employer, Morley Theilman, has asked her to deliver a suitcase to a train station locker and not look at its contents. However, she believes her boss is being blackmailed and the suitcase is full of money. Mason accepts a $1 retainer from her, helps her confirm her suspicion of the contents and, after recording the serial numbers on some of the bills, helps her deliver it. Later, when both Theilman and his client disappear, Mason believes he was an unwitting pawn and his client and her married both ran away together. However, when he finds her in Las Vegas with Theilman's 1st wife and later learns Theilman has been murdered, Mason finds himself defending his client against the charges. 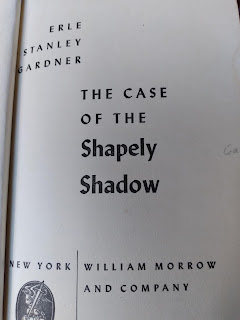 Review: I picked out this Perry Mason novel from the library a few days ago and managed to finish it yesterday evening while outside barbecuing. Overall, I have to say it was an enjoyable mystery.

There were a few things that really stood out for me when it came to this book. One of the main ones was the fact Mason really didn't know if his client was innocent or not. All the evidence seemed to point to her, including evidence she had some of the money that was supposed to have been given to the blackmailer. Plus, even with the possibility she would go to the gas chamber, she seemed to still be withholding information from him.

In fact, I started to believe she was guilty when Mason seemed to be making no effort to prove her innocence and, instead, was using a bunch of legal maneuvering to prevent the prosecution from presenting its full case and trying for a mistrial rather than an acquittal. It had me wondering if this would be one of the rare times he helped a guilty client avoid prison, especially since the final twist was one I wasn't expecting.

Another thing that intrigued me was Theilman's second wife. This was both because of her past, which seemed to be cloudy since she had chosen to use a stage name most of her life rather than her real name and because she seemed like a woman who would rather murder her husband than risk losing him (and his money) to another woman. Even though none of the evidence seemed to point to her, I still had a hard time not considering her a suspect, especially when it was revealed the blackmailer had used her real name. It was one of those things that kept this mystery hard to solve.

Final Opinion: This is an intriguing murder mystery with a couple very good suspects and a client who definitely seemed to be guilty. I enjoyed reading it and do recommend it.