Book Review: The Case of the Reluctant Model by Erle Stanley Gardner (1961)

Synopsis: Art dealer Lattimer Rankin wants to sue Collin M. Durant for a half million dollars after Durant casually suggested Rankin sold a fake painting. Perry Mason convinces him to have the painting's owner sue Durant instead and even helps by getting a signed affidavit from model/artist Maxine Lindsay, the lone witness to the accusation. Mason, however, begins to suspect Durant of setting a clever trap and his worries seem justified when he discovers Maxine is leaving town. When Durant is found murdered in Maxine's apartment, Mason believes her when she said she didn't do it and decides to defend her in court. 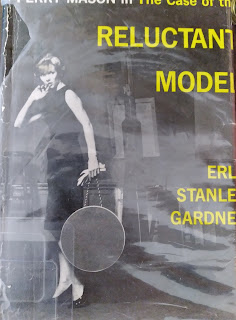 Review: I checked this book out from our local library a few days ago and, from the description, had high expectations for what sounded like an intriguing murder mystery. However, while the book started out well, I feel like it just didn't live up to those expectations overall.

At first, I didn't think that would be the case. Maxine was acting suspiciously, her story about visiting her sister seemed plausible but not necessarily true, the victim was found in her apartment and the canary she asked Della Street to check in on didn't seem to exist. In other words, she seemed like the type of defendant I like to see, one that is probably innocent but might be guilty.

Unfortunately, as the book progressed, it became fairly obvious there was almost no evidence connecting her to the crime. A witness put her at the bus station she had claimed to call from. Another witness who claimed she saw her at the apartment around the time Durant was murdered couldn't positively say it was her and not some other woman (she also confirmed the existence of the canary), and the murder weapon was placed in a train locker after Maxine left town.

In other words, this was yet another Perry Mason case where the prosecution had almost no evidence against the defendant, evidence that suggested someone else might be the killer and plenty of other suspects yet still chose to go through with charging Mason's client solely because he was the attorney. The gun evidence alone should have been enough to make the police look for another killer. Frankly, I'm starting to wonder why Lt. Tragg doesn't come to Mason for advice so he could catch the real killer on the first try for once.

Final Opinion: It's an interesting premise but the evidence against the defendant was a bit too weak to make this a memorable case. It's an OK book but not one of my favorites.