Book Review: The Case of the Bigamous Spouse by Erle Stanley Gardner (1961)

Synopsis: Door-to-door bookseller Gwynn Elston comes to Perry Mason with a problem. While making a sales call, she discovered her best friend's husband, Felting Grimes may be a bigamist living a double life as Frankline Gillett and Felting may have tried to poison her as a result. Despite the risk, Gwynn decides to try to confirm her suspicions and, instead, winds up giving a ride to a stranger who ends up leaving his gun in her car. When Frankline Gillet is found murdered the next day, she becomes the primary suspect. 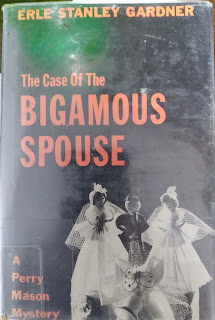 Review: Since I am almost to the end, I decided to make an effort to finish the rest of Gardner's Perry Mason novels and, because of that, checked out this book from the local library a few days ago. Unfortunately, while the premise sounded promising, this book did prove to be a bit of a disappointment.

Mason seems to have two kinds of clients - those that are charged because the evidence makes them look guilty and those who are charged solely because they happen to be his client. Gwynn Elston definitely fell into that latter category. The evidence against her was weak at best and the only reason she even became a suspect Mason reported the crime and Lt. Tragg figured out she was the one who discovered the body. Yet even though there were better suspects, including both of his wives, she was the one who was charged.

On top of it, unlike many of his other clients, who told stories that could have been fabricated, Gywnn's story about giving someone a ride and being handed their gun was confirmed by the police, giving them yet another suspect who made just as much sense. It really made me wonder, had she picked another attorney, would they have even charged her?

I did think the discovery of Gillet's deceased father was somewhat interesting because, at least at first, it seemed to be adding a whole new twist to the story, especially since nobody made a serious effort to determine if he really did die of natural causes and he had a criminal background. However, I did feel like it ultimately didn't add a whole lot to the plot, other than one obscure clue (which Mason went out of his way to hide, for some reason, despite the fact it could have potentially helped his client).

I was also kind of disappointed the whole attempted poisoning angle didn't go anywhere. I was hoping there would be some sort of twist involving the real killer trying to get her out of the way rather than the victim. Instead, while Mason confirmed it happened, he never really does anything with that information, making it seem like such a waste.

Final Opinion: As I said, I liked the premise but would have liked the overall book a lot more had there been legitimate evidence against his client. Once her story was confirmed, it just seemed like there were better suspects for the police to investigate and ultimately kept the book from having nearly as much impact because her innocence was pretty apparent.