Book Review: The Case of the Blonde Bonanza by Erle Stanley Gardner (1962)

Synopsis: Perry Mason visits a vacationing Della Street at her aunt's house and is introduced to Dianne Adler, a former secretary who recently signed a modeling contract that will pay her $100 per week for 2 years in exchange for gaining 12 pounds. Mason believes someone is scamming Dianne and, when the modeling agency tries to break its arrangement, accepts a $1 retainer to represent her in a lawsuit. However, when the agency's owner, Harrison Boring, is beaten to death, he must defend his client against murder charges. 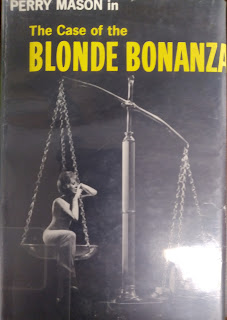 Review: My daughter is back at the skating rink over the summer and that gives me time to read while waiting for her to get done. As a result, I made it through this Perry Mason mystery in a couple days. Unfortunately, while the book started out with a lot of potential, it didn't end up being as good as I hoped it would be.

The most interesting thing about this murder mystery, in my opinion at least, is the "modeling" contract his client signed. It sounded like a scam from the moment she mentions it but, at the same time, she was receiving the money that was promised to her, at least until Harrison Boring claimed to have run out of money and needed to pause the payments temporarily. Had that remained a mystery for the bulk of the book, it might have made a difference but, instead, that part of the mystery is revealed by chapter four.

Another thing not helping this mystery is there is no real sense of urgency. The only evidence against Mason's client is she was the last one seen in the victim's motel room by a detective working for Mason. That, alone, didn't seem like enough to even bind her over for trial, let alone get a conviction and, once the timeline clearly didn't add up, it wasn't too difficult to figure out who the real killer was.

I will admit, the part of the book about Dianne's estranged father was somewhat interesting, especially the way he was so willing to give her a generous financial settlement in exchange for keeping quiet about their relationship and the way his new "wife" wasn't overly likable but was also willing to give up a great deal of money and event commit perjury to help Dianne. Unfortunately, much like the rest of the book, it seemed to fizzle out after a while, and I feel like maybe her dad didn't quite get what he deserved considering he did fake his death so he could abandon both her and her mother.

Final Opinion: I liked the premise but wish the book wouldn't have revealed the real reason for the contract she was asked to sign until closer toward the end. Without that part of the mystery, there just isn't enough left to make this book overly memorable.