Synopsis: When secretary Arlene Ferris' car doesn't start after work, she cautiously accepts a ride from her boss' son, Loring Lamont, despite knowing his reputation with women. When Loring takes her to his family's country retreat and attempts to rape her, Arlene gains the upper hand and drives away in Loring's car. Expecting to be fired the next day, Arlene goes to Perry Mason for help filing charges against her attacker. However, when Loring is found murdered, Arlene becomes the primary suspect. More importantly, her story doesn't seem to match the evidence. 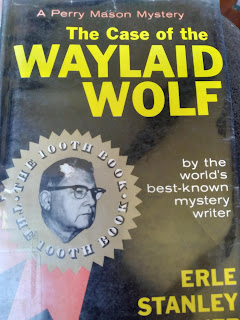 Review: I checked this book out from the local library a few days ago and, since it was raining, was able to finish it yesterday morning. After reading it, I have to say it is one of my favorite Perry Mason novel so far.

The murder mystery surrounding Loring Lamont was much more intriguing than expected because, even though it was obvious Mason's client wasn't the killer (from the book filling the reader in on her story before she met Mason), the police seemed to be able to disprove everything about her story. The victim wasn't wearing muddy clothes (despite him chasing her through a muddy field) and didn't have a change of clothes in the house. He hadn't eaten the food she helped him make but police found the ham and eggs in his stomach. And any evidence that did support her story was under scrutiny because Mason's tactics made it look like he was trying to plant evidence.

Also making this mystery interesting was the fact there wasn't another solid suspect. I was partially right on one of my guesses but it turned out that person wasn't the killer, just someone that knew who might have done it. Everyone else either had no apparent motive or, if they did have a motive, could be ruled out.

I did feel like the book didn't quite do Lt. Tragg justice. He's always been one of my favorite characters in this series because, while he manages to be someone who can stay a step ahead of Mason, he also is typically open minded enough to consider other theories. In this case, however, he seemed to be purposely overlooking the evidence that supported the defendant's story despite not seeming to be totally convinced Mason planted evidence. It was a bit disappointing, especially when it is revealed he didn't bother investigating a couple things that likely should have been investigated.

Final Opinion: This is a great murder mystery with a defendant who couldn't possibly have committed murder but with plenty of evidence showing she lied about what happened and no other firm suspects. It's definitely a book worth taking the time to read.