Book Review: The Case of the Calendar Girl by Erle Stanley Gardner (1958)

Synopsis: After visiting "politician" Meridith Borden and agreeing to pay him protection money, contractor George Ansley is involved in an accident that results in the other driver going off the road. He gives the other driver, an attractive model, a ride back to her apartment building then, suspecting he might be getting set up, asks Perry Mason for legal advice. Mason reluctantly agrees and, when Borden is found murdered, must defend Ansley against the charges. 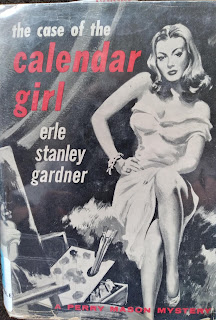 Review: I checked this book out from our local library figuring it would give me something to read the two nights were were visiting my oldest daughter's college for orientation. As it turns out, I finished the book in only one night and, unfortunately, was left a little disappointed by it.

I've had this complaint about other Perry Mason books before - when they start out by telling the story from his defendant's perspective, the mystery just isn't as good. This book was a textbook example of why Perry Mason books lose a little something when you know his defendant is innocent from the very start.

Basically, because of the way the book opened, it was clear Ansley wasn't the killer and, since he wasn't the killer but the murder weapon was found in his car, it wasn't too difficult to figure out who placed it there. The end result was I had a good idea who the real killer was long before the book was over.

Unfortunately, this also ruined what would have otherwise been a nice twist, with Mason making another person seem guilty of the crime and then turning around and defending her against the criminal charges. Again, it was obvious she wasn't the person who planted the gun and, as a result, it was pretty clear she was just a red herring.

Final Opinion: I think this book had a lot of potential but, because the author gave away too much detail early on, the murder mystery wasn't as good as it could have been. I've read worse books but this one just wasn't anything overly memorable.