Book Review: The Case of the Caretaker's Cat by Erle Stanley Gardner (1935)

September 12, 2019
Synopsis: When wealthy Peter Laxter died in a fire, he left a provision in his will that guaranteed his faithful caretaker, Charles Ashton, a job and a place to live for the rest of his life. However, when Peter's grandson, Sam, one of his heirs, insists the caretaker give up his beloved cat, Ashton goes to attorney Perry Mason for help.
Out of pity, Mason takes the case for a fee of $10. However, things prove much more complicated than he expected when Ashton and a witness are both murdered and he ultimately ends up defending the fiance of Peter Laxter's disinherited granddaughter. 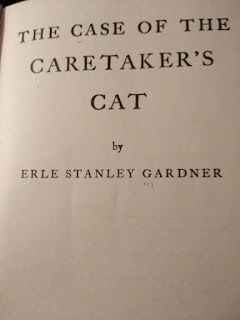 Review: After being somewhat disappointed by The Case of the Counterfeit Eye, I wasn't planning on reading any more Perry Mason books for a while. However, when I was at the library a few days ago, I couldn't find the two books I intended to check out and, since I had a time crunch (I had just gone grocery shopping and there was perishable food in the car), I wound up checking out this book after all.

When I started reading it later that evening, I was admittedly reluctant. But, after finally finishing it last night, I have to say I liked it more than I was expecting.

As far as the actual mystery goes, it really wasn't too hard to take an educated guess (even without clues to back up the theory) about who really did kill Ashton and the witness as well as the truth behind Peter Laxter's death.

However, even though I pretty much had that figured out about halfway through the book, there were still enough twists and turns to keep it interesting. This included explaining why Mason's client, if he really was innocent, had blood stains all over his clothes and how another person could have killed Ashton when Mason's client was the only one seen leaving the room.

Some of Mason's actions throughout the book were also intriguing. He obviously had a reason for buying a brand new car, going on a "honeymoon" with his assistant, Della Street and using Ashton's dead brother's name. But, it was difficult to figure out exactly what that reason was until he had his big reveal (ironically, as a witness for the prosecution).

I'm still a bit undecided about the new attorney/Mason's nemesis, Shuster. I'm not sure I'd want to see him as a recurring character in every book but there were times in this particular case when having a character like that really brought out Mason's best. This was especially true during the trial when Mason cleverly worked around Shuster's influence on one of the key witnesses. It definitely caught my attention and I wound up re-reading Mason's line of questioning a second time just because I thought it was great.

Final Opinion: I didn't intend on checking out this book when I was at the library. But, after reading it, I am glad I gave Perry Mason another chance.