Book Review: The Case of the Screaming Woman by Erle Stanley Gardner (1957) 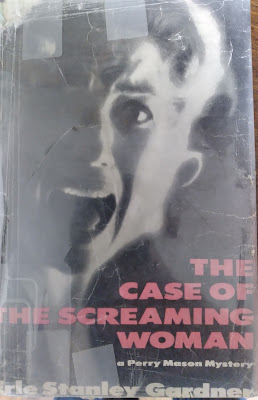 Review: When I picked out this book at our local library a few days ago, the title and the description had me believing this would be one of my favorite Perry Mason books. After finishing it last night, I can say I didn't hate it, but it also fell far short of expectations.

The overall premise wasn't a terrible one, the victim was running an illegal abortion clinic and the fact he had both Kirby and Logan written in his appointment book made Mason's client look like one of the primary suspects. Norma choosing to hire an unscrupulous attorney who was looking to make some extra money by blackmailing the doctor's clients also seemed like a nice touch.

The main problem with the book is the case itself was a bit too complicated from a prosecution standpoint. Basically, since John was being charged as an accomplice, the prosecution first had to prove Norma was guilty of murder. This makes Mason's defense a little too easy, in my opinion, especially when the prosecution decided to use her as a witness instead and her side of the story didn't even have John inside the house.

Frankly, if it weren't for that drawn-out subplot about the doctor's stolen records, which turned out to be a MacGuffin, I think this book would have been considerably shorter. In all honesty, I think it would have been a better case had Mason been defending Norma (who at least was there when the doctor was killed) or had the doctor be the client rather than the victim.

Final Opinion: As I said, I didn't hate the book. However, it wasn't one of my favorites from this series either.