Book Review: The Case of the Nervous Accomplice (1955)

Synopsis: Sybil Harlan knows about her husband's affair with his business client Roxy Claffin but, since he is her whole world, she doesn't want a divorce. Instead, she wants Perry Mason to buy stock in a company her husband is dealing with on Roxy's behalf and do everything he can to stop the deal, hoping the other woman's reaction will drive her husband back into her arms. However, when Sybil is blackmailed by another stockholder and that stockholder is later murdered, she needs Perry Mason to prove her innocence. 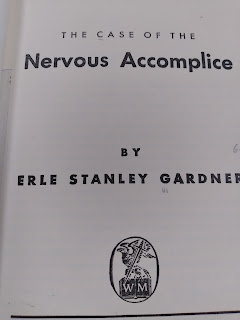 Review: I picked up a copy of this book at the library on Friday and, despite starting out by reading another book (which I lost interest in after about a day), managed to finish it by Monday. At first, I wasn't sure what to think of it but, after reading the last page, do think it was a good read overall.

I thought the overall case was intriguing. While I was never convinced his client was guilty, a variety of poor judgements did at least make it seem like she was trying to look that way. This includes everything from being on the property at the same time the victim was killed, having a gun in her possession at the time he was killed, taking his car keys and later hiding them, and acting extremely suspicious when she flagged down a taxi, allowing the driver to remember her. That, when combined with the motive, did make her seem like the most likely suspect.

I was also a little intrigued by the love triangle she was embroiled in, mostly because I really had a hard time seeing what she saw in her husband. In all honesty, he was kind of an ass, both because he was cheating on her and the way he made Mason's job harder by berating her in court in front of reporters (I loved how Mason turned that around on him). Even if she did win him back from Sybil (who also was probably too good for him), I wasn't convinced he wasn't going to just find someone else.

My only real complaint about this book is I wasn't a fan of how Mason got around the taxi driver's testimony by going to great lengths to effectively tamper with the witness. It wouldn't be the first time he's overstepped in a case but, considering he's always talking about getting to the truth, him confusing the situation and hiding evidence did seem a little out of character. I mean, is it really winning if you cheated?

Not to mention, he might have actually hurt his client a bit. Based on that testimony, I wasn't convinced the taxi driver would have been able to pick her out of a lineup if Mason hadn't arranged for a second meeting between him and Sybil first.

I also feel like Mason got more than a little help from the prosecution, which seemed to make very little effort to ensure they had all the evidence despite knowing Mason's reputation. Things like the wrong taxi receipt and not checking for fingerprints in the car until the judge suggested it did seem a bit amateur, as though Hamilton Burger secretly wanted to lose.

Final Opinion: I probably wouldn't say this was one of my favorite Perry Mason books, but it did prove to be an interesting mystery and I would recommend it.