Book Review: The Case of the Demure Defendant by Erle Stanley Gardner (1955)

Synopsis: When Dr. Logbert Denair uses a truth serum therapy on Nadine Farr to find out what secret has been troubling her, he is both surprised and concerned when she confesses to killing someone and consults Perry Mason. Mason agrees to help the girl but the police, after receiving a tip about the confession, are quick to find corroborating evidence. Complicating things is very-public evidence tampering accusation against Mason with no way to prove he didn't do it. 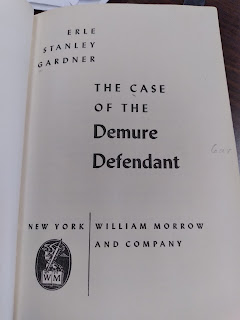 Review: When I checked this particular Perry Mason novel out from our library, it was done with some high expectations because I enjoyed the previous couple I had read. Unfortunately, this one really didn't live up to those expectations.

The case itself was an intriguing one. The defendant seemed to believe she killed the victim (albeit by accident) and hid the evidence. However, the discovery of a second bottle of pills in the same place she disposed of the first one did create some doubt about that, along with the fact just about anyone in the house could have slipped in the poison when she wasn't watching.

I also thought the twist involving her confession had some potential. Would it be allowed if she was in a drugged-up state? And, if it was, how would Mason prove it wasn't real?

I think the problem with this book is it didn't focus enough on her case and, instead, spent an awful lot of time on Mason's evidence tampering charge. Even when he was in the courtroom, the proceedings ultimately became more about that than they were about his client. In fact, his big reveal at the end almost seemed anti-climactic since he just discovered it by accident while trying to defend himself. It wasn't courtroom brilliance, it was luck.

Also not helping this book is the fact the whole "prosecutor/police gunning for Mason" theme that seems to be in most of these books is burning itself out. It's not like Mason is using technicalities to get acquittals for guilty clients, he's just pointing out shoddy police work to prove his clients' innocence. If anything, you would think Hamilton Burger would be gunning for the police at this point, instead of Mason.

Final Opinion: This had an intriguing premise, but I think there was just too much focus on Mason's reputation and that made the murder case seem almost secondary at times. It's not the worst book I've read, but it wasn't among my favorites either.