Synopsis: As a child, Chris Multerer watched professional wrestling whenever he had a chance and, as an adult, had an opportunity to turn his love for pro wrestling into a 10-year career as a "jobber," a wrestler whose job it was to make the stars look good. In this autobiography, he shares the highlights from his career. 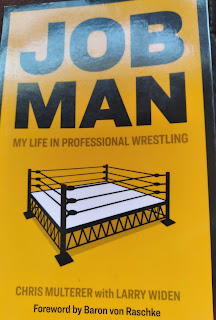 Review: I didn't plan on checking out a non-fiction book when I was at the library. In fact, the only thing I had planned on checking out was another Perry Mason mystery. However, while waiting for my kids to get their books, I happened to see this one on display and decided to get it.
I don't know if I ever was a die-hard professional wrestling fan and I certainly don't watch it very often today. However, growing up, I did enjoy watching matches from the American Wrestling Association and World Wrestling Federation, at least on occasion.  I have also read multiple autobiographies from well-known wrestlers and was intrigued about a book written by one of the guys who made a career out of it without becoming a star.
Overall, I have to say it was an enjoyable book. The author did a good job of telling his life story while also giving the reader a glimpse into the world of professional wrestling in the 1970s and 80s, when it was still a territory business that protected its secrets.
Some of the stories he told were quite funny, like when he was refereeing a match and accidentally ripped his pants at an opportune moment. Others were still funny but maybe a little on the cruel side, like when his mom was freaking out during one of his matches and he thought it was comical making her think he was getting hurt.
There were also some fairly serious ones as well, especially when he talked about some of his matches and pointed out just how easily it would have been for him to get seriously hurt if his opponent made a simple mistake. It really made me appreciate just how much of a risk he and others were taking for a relatively small amount of money.

Final Opinion: This was a book that was both informative and entertaining to read. I'd recommend checking it out even if you aren't a big professional wrestling fan.