Book Review: The Case of the Hesitant Hostess by Erle Stanley Gardner (1953)

Synopsis: Attorney Perry Mason believes his court-assigned client, Albert Brogan, is being framed for armed robbery. However, the two victims in the crime, Rodney Archer and Martha Lavina, insist Brogan was the man and the one witness who could refute their testimony, nightclub hostess Inez Kaylor, fled the courtroom and cannot be found. To make matters worse, prosecutors hope to use the armed robbery conviction to pin a murder charge on Brogan as well. Mason has just one weekend to figure out why Archer and Lavina are lying. 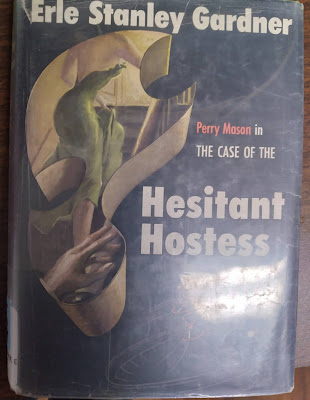 Review: I took a break from reading Perry Mason books after not enjoyng the last couple as much as I had hoped. However, I couldn't figure out what to get the last time I was at the library and wound up checking out this book as a result.

While I'm still not as big of a fan of Perry Mason as I am of other literary detectives, this book did wind up being better than I expeced it to be.

I think the thing I liked the most about this book was the way it started with Mason having his back against the wall from the start. He had no solid defense for his client, his surprise witness was in the wind, and, even though he was certain the two victims were lying about what happened the night of the armed robbery, he wasn't able to shake them on the stand. He was already running out of time when he learned the prosecutors also had evidence his client was guilty of a murder, increasing the stakes even more.

They mystery surrounding Inez Kaylor was also intriguing. She had seemed to be a cooperative witness yet ran away the second she was left unattended and, when she was found and subpeonaed, tried to kill herself and was hauled off in a fake ambulance. There was definitely something off about that whole situation and that second mystery made the overall case even more intriguing.

Final Opinion: There are a couple parts in the book that do drag on a little bit but, overall, I thought this was a good murder mystery, especially when Mason was working his magic in the courtroom. It's worth taking the time to read.