Book Review: Agatha Raisin and the Wellspring of Death by M. C. Beaton (1998)

Synopsis: When a corporation wants to bottle water from a popular local spring, Agatha Raisin, still trying to get her neighbor, James, out of her mind, accepts a freelance job getting the local residents on board. When one of the people opposing the company is found murdered, she tries to focus on her job and stay away from another amateur investigation but changes her mind when James decides to investigate it himself. 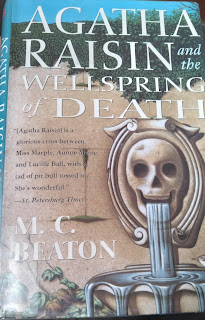 Review: I was a little hesitant to check out another Agatha Raisin book because they haven't been as good as I was hoping lately. However, I decided to give it one more try. Unfortunately, this one didn't convince me I shouldn't take a break.
It's not that I don't like M. C. Beaton's books, I am just finding it harder to care about Agatha Raisin with every new book and this book didn't change that.
The mystery itself was OK, though it wasn't overly difficult to figure out who the killer was (there was really only one person who had the most to gain from the murder). If nothing else, Beaton did a decent job at least giving multiple suspects.
The main problem is the same one I've had with other books from this series. Agatha isn't that great of a detective, solving murders almost completely by luck (James actually solved this long before she did) and honestly isn't even that likable as a person. At minimum, I wish she would grow a backbone rather than let the various men in her life dictate her decisions, especially James, who I've grown bored with as a potential love interest for her.
Final Opinion: It's an OK murder mystery but, after reading it, I am going to take a break from reading books in this series because the weakest part of the story is the protagonist. Maybe I'll try again later.
My Grade: C
books british books murder mysteries reading