Book Review: The Body in the Library by Agatha Christie (1941)

Synopsis: When the body of an unknown young blonde is found in the library of Colonel and Dolly Bantry's estate. Fearing the scandal it might cause, Dolly calls up her old friend, Jane Marple, to help with the investigation and, as more is discovered about the deceased, even the authorities are quick to rely on Miss Marple's deductive abilities. 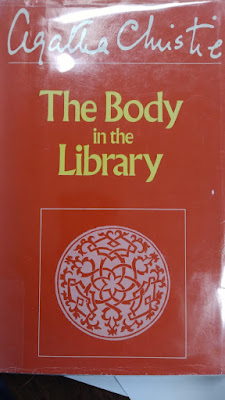 Review: Even though I did like The Murder at the Vicarage, that was the only Miss Marple mystery I've read until now (seeing a movie featuring the character renewed my interest). I finished this book early this morning and, overall, have to say I enjoyed it.

The thing I found I liked best about this book was the murder mystery itself. As more is revealed about the victim, Ruby, the motive behind her murder seems to be somewhat clear and there are a few solid suspects. However, at the same time, none of the theories seem to add up when the location of the victim's body is taken into account. Since there was no evidence she even knew the Bantry's, why was her body in their library?

Also adding to the intrigue is the discovery of a second body. Even though it was easy to assume it was related to the first death solely because it is mentioned in the book, there did not seem to be any sort of connection between the two victims. I have to admit, it left me scratching my head until the very end.

My only real complaint about this book is I feel like I missed something when it comes to the main protagonist. This is only the second book in the Miss Marple series (I double checked) but, by the way her detective skills were described by some of the authorities and their willingness to bring her in to consult, it was as though she was involved in other mysteries between this case and the first one.

I am assuming this is because of the decade-long gap between the two books but it still gave me the same feeling I get when I try to watch a movie sequel without watching the original. As a result of that, I kind of feel like this book might have been slightly better had it not acknowledged the time gap or, at very least, a better explanation was given explaining why the police now wanted her help.

Final Opinion: Overall, the book had a solid mystery and, because of that alone, I recommend taking the time to read it.